Now I have to show you how to use that formula, how to use eigenvalues and eigenvectors. OK. So we know we can take powers of a matrix. So first of all, what kind of equation? There's an equation. That's called a difference equation. It goes from step k to step k plus 1 to step k plus 2. It steps one at a time and every time multiplies by A. So after k steps, I've multiplied by A k times from the original u0.

So instead of a differential equation, it's a step difference equation with u0 given. And there's the solution. That's the quickest form of the solution. A to the k-th power, that's what we want. But just writing A to the k, if we had a big matrix, to take its hundredth power would be ridiculous. But with eigenvalues and eigenvectors, we have that formula.

And now the point is that as I take these steps to u1-- what will u1 be? u1 will be Au0. So I'm multiplying by A. So when I multiply this by A, what happens? That's the whole point. c1, A times x1 is lambda 1 times x1. It's an eigenvector. c2 tells me how much of the second eigenvector I have. When I multiply by A, that multiplies by lambda 2, and so on, cn lambda n xn. And that's the thing. Each eigenvector goes its own way, and I just add them together.

OK. And what about A to the k-th power? Now, that will give me uk. And what happens if I do this k times? You've seen what I got after doing it one time. If I do it k times, that lambda 1 that multiplies its eigenvector will happen k times.

Right now, I'm just getting the formulas straight. So I have the quickest possible formula, but it doesn't help me much. I have the using the eigenvectors and eigenvalue formula. And here I have it that, really, it's the same thing written out as a combination of eigenvectors. And then this is my answer. That's my answer to the-- that's my solution uk. That's it. So that must be the same as that.

Do you want to just think for one minute why this answer is the same as that answer? Well, we need to know what are the c's? Well, the c's came from u0. And if I write that equation for the c's-- do you see what I have as an equation for the c's? u0 is this combination of eigenvectors.

But look, you see there that V inverse u0, that's the first part there of the formula. I'm trying to match this formula with that one. And I'm taking one step to recognize that this part of the formula is exactly c. You might want to think about that. Run this video once more just to see that step.

And finally, this factor has-- everybody's remembering here. V is the eigenvector matrix x1, x2, to xn. And when I multiply by V, it's a matrix times a vector. This is a matrix. This is a vector. And I get the combination-- I'm adding up. I'm reconstructing the solution.

So first I break up u0 into the x's. I multiply them by the lambdas, and then I put them all together. I reconstruct uk. I hope you like that. This formula, which it's like common sense formula, is exactly what that algebra formula, matrix formula, says.

OK. I have to do an example. Let me finish with an example. OK. Here's a matrix example. A equals-- this'll be a special matrix. I'm going to make the first column add up to 1, and I'm going to make the second column add up to 1. And I'm using positive numbers. They're adding to 1. And that's called a Markov matrix. So it's nice to know that name-- Markov matrix.

One of the beauties of linear algebra is the variety of matrices-- orthogonal matrices, symmetric matrices. We'll see more and more kinds of matrices. And sometimes they're named after somebody who understood that they were important and found their special properties. So a Markov matrix is a matrix with the columns adding up to 1 and no negative numbers involved, no negative numbers. OK. That's just by the way.

But it tells us something about the eigenvalues here. Well, we could find those two eigenvalues. We could do the determinant. You remember how to find eigenvalues. The determinant of lambda I minus A will be something. Could easily figure it out. There's always a lambda squared, because it's two by two, minus the trace. 0.8 and 0.7 is 1.5 lambda, plus the determinant. 0.56 minus 0.06 is 0.50, 0.5. And you set that to 0.

This is like-- actually, the whole Google algorithm for page rank is based on a Markov matrix. So that's like a multi-billion-dollar company that's based on the properties of a Markov matrix. And you repeat it and repeat it. That just means that Google is looping through the web, and if it sees a website more often, the ranking goes up.

And if it never sees my website, then for that, when it was googling some special subject, it never came to your website and mine, we didn't get ranked. OK. So this goes to 0. 1/2 to the-- it goes fast to 0, quickly to 0. So that goes to 0. And of course, that stays exactly where it is. So there's a steady state.

What happens if page rank had only two websites to rank, if Google was just ranking two websites? Then its initial ranking, they don't know what it is. But by repeating the Markov matrix and this part going to 0, right, goes to 0 because of 1/2 to the k-th power, there is the ranking, 0.6, 0.4. That's where Google-- so this first website would be ranked above the second one.

OK. There's an example of a process that's repeated and repeated, and so a Markov matrix comes in. This business of adding up to 1 means that nothing is lost. Nothing is created. You're just moving. At every step, you take a Markov step. And the question is, where do you end up? Well, you keep moving, but this vector tells you how much of the time you're spending in the two possible locations. And this one goes to 0.

OK. Powers of a matrix, powers of a Markov matrix. Thank you. 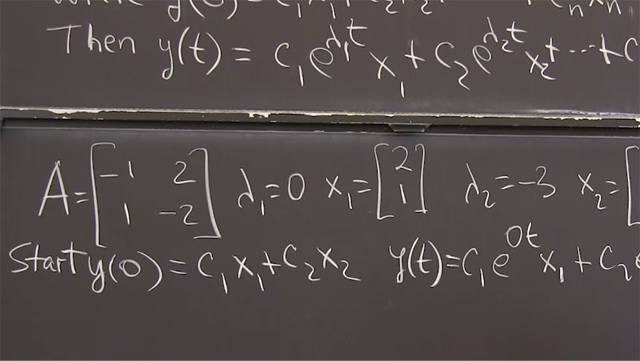