Differential Equations and Linear Algebra, 5.6b: Incidence Matrices of Graphs

The incidence matrix A has a row for every edge, containing -1 and +1 to show the two nodes (two columns of A) that are connected by that edge.

OK. I want to continue the last video, which was about incidence matrices, and graphs, and networks, and flows in the network. So that was 5.6. This is 5.6b.

And I'll remember the same graph. You remember a graph is some nodes, four nodes here, and some edges, and in this case five edges. So I have a 5 by 4 matrix, and that's what it was.

And I'll remember how it was created. Every row corresponds to an edge. So the first edge there goes from node 1 to node 2, so I put a minus 1 and a 1 in columns one and two. That tells me what that first edge is doing and it gives me one row of the incidence matrix. Five edges give me five rows. There is the matrix.

And here I'll multiply by v, thinking of a vector v as voltages at the four nodes, and I get that answer. The 1 and minus 1 produce this kind of answer. OK.

But those columns are dependent. Now, how can we see that? Well, in this case, we can find a solution to Av equals 0, because I can see how do I get all those differences to be 0? Well, not hard. v could be the vector of all 1's. Then the differences would all be 1 minus 1, would all be 0. I would be solving Av equals 0.

And I learn something important. Av equals 0 has some solutions. And I'll just jump ahead one electrical moment. That's not good if we want an invertible matrix. In the end we would have A transpose A and it won't be invertible unless we do something.

And what do we do? We want to get rid of that last column. We can have three columns. Those will be independent, but that fourth column is a combination of the others. And what we do, in reality, is we ground a node, which means we set one of the v's, maybe v4, if we set that to 0, it's like we're fixing the temperature, we're fixing the voltage, we often have to do this on a sliding scale.

If we only know differences in temperature, we have to say, where is 0? And if we make that point 0, then we have only three unknown voltages and a 5 by 3 matrix and all well. OK. So that's the discussion of Av equals 0.

And that's the beauty of this example, that it's not just a bunch of 20 numbers in the matrix. The matrix has a meaning. The incidence matrix takes differences A to Av is differences in v, but what's the meaning of A transpose? That's the key question here. Why is this equation very important? OK.

And what is that law? What does it mean? It means that in the network at a typical node, so at node 1, you remember, there was an edge out. Edge 1 went out. Three edges went out actually. This was to node 2. This was to node 3, and that was to node 4. At node 1, three edges are going out. And what does the current law tell me? It tells me that the total flow out is 0. The net flow, any flow in, which would be negative w's, and any flows out, which would be positive w's-- w, that came from the first edge. This was maybe the second edge. And I think that happened to be the fourth edge-- flows out of w.

I just took those numbers from the first row. I wrote down that first equation. And you see it says exactly the sum of those three flows has to be 0.

So if there's some positive flows going out, there must be some negative w's coming in to balance. OK. And that was at node 1, and similarly at nodes 2, and 3, and 4, currents balance. It's the balance equation.

Kirchhoff's law, it's the balance equation. It's conservation. A fundamental equation in modeling applied mathematics is if a body is sitting there in equilibrium, then the forces on it are in balance. If I have steady flow around the network, the currents are in balance. Always there's a balance equation, so that things are not collecting up at a node. It's stable. OK.

As I said, we've got five unknowns here and only four equations. So we're certainly going to find a solution. And let me suggest one good way to look for it.

Pay attention. It's going to send 1 Amp around the loop. I go with the arrow, with the flow, this way and this way, but this one is against the arrow. So I'm thinking that a solution is w1 equals 1.

You see I'm writing down a solution without doing any elimination or other linear algebra. I'm just understanding the picture. w1 is 1. w5 is 1. w5 is 1. And what is w4? Negative 1, because it's going against the arrow.

Here's another loop. I could send flow down there. Now that would be a w4 plus 1. This way. This way. Do you see that second loop? Let me draw my little loopy symbol. Flow going around that loop. That loop happens to have four edges on it. So I'd have four w's. 1 minus 1, 1, and minus 1, and no flow on edge 1, and I would have another solution. And it would be a different solution.

So I'm going from-- Can I insert here two loops? In that graph I see two loops, two small loops. And each of those small loops gives me a flow, a w, that solves the current law, because it's just continuously running around and around.

Now, there's another question to ask you, and that is what about the big loop, w1, w3-- I think that is-- and minus w2? What if I send flow around the big loop? No problem. That gives me another set of w's . Those satisfy Kirchhoff's current law. They satisfy these equations. They satisfy A transpose w equals 0.

And linear algebra told me that was the number to look for. And here you're suggesting-- I'll blame you-- a third around the big loop. So what's up? Well, do you see it? The flow around that big loop does solve A transpose w equals 0, but it's not new. It's the sum of a flow around that loop plus a flow around that. Do you see?

The difference between m and n comes in it, and then plus k. So independent solutions.

We have voltages. We have currents. And there's a lot of beautiful linear algebra involved with these matrices. 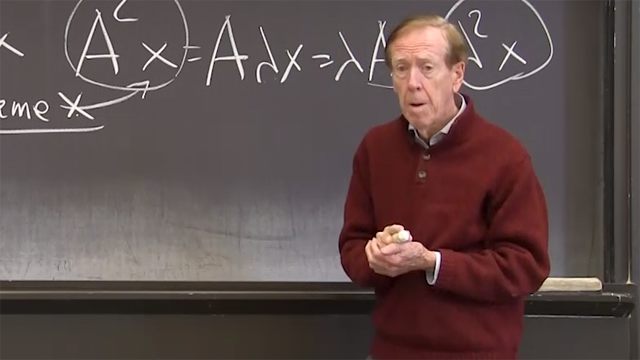