Nevzat Can Yerlikaya on 25 May 2022
⋮
Commented: John D'Errico on 25 May 2022
Accepted Answer: John D'Errico
Hello, I want to generate random numbers for probability function with using mean, maximum and minimum values. For example, I know the average probability of X is 0,4. What I want is to reate random numbers between 0 and 1 with most of them close to 0,4. Is there a function like this? Does this contradict the randomness of random numbers? Thank you for your help!

⋮
I conducted a survey for probability and I want to include this as an input. Is it possible?

⋮
We can't know if what you want can be used in a certain application, until you clarify what it is that you want.

⋮
Well, to clarify, I have risk events and I want to complete MCS for effect of my risk events to my schedule. In order to obtain a histogram for my project schedule, I want to generate random numbers for probabilities of my risk events. However, probabilities of those event are not fully random. For example, probability of my construction to be burn is obviously lower than probability of worker accident delaying the construction, which is more common. Thus, I want to generate numbers in such a way that for example, for 10000 generated numbers, only a small portion would give probability of fire being higher than probability of work accident. This is why I conducted a survey and from survey I got fire probability as 10 percent while work accident as 85 percent. I can use mean and standard deviation but since there is a predefined limit for probability [0 and 1], I did not know how to use it.

⋮
https://en.m.wikipedia.org/wiki/Beta_distribution
beta distribution can satisfy the min max mean requirements. You would take
xprime = (x-min) /(max-min)
and beta() that. The mean is at alpha/(alpha+beta) so for example alpha = 2 beta = 3 gives mean at 2/5. If you have a desired standard deviation then the formula for the variance together with the formula for the mean would give you a pair of simultaneous equations to allow you to solve for alpha and beta.

John D'Errico on 25 May 2022
⋮
Edited: John D'Errico on 25 May 2022
Ran in:
Sigh. I've probably seen different variations of this question asked at least many hundreds of times over the 40+ years I have been answering questions and doing consulting. The problem is, it has no answer. At least not one that you will be happy with in the form you asked it. That is, there are infinitely many distributions one might choose that have the properties you describe.
For example, a beta distribution is a nice example, or perhaps a truncated normal distribution. They could both have the general curve shape you describe for the PDF. But even in those two specific cases there are infinitely many choices one could make, ALL of which satisfy the requirements. And you have not given sufficient information to choose between anything.
For example, consider a beta distribution.
https://en.wikipedia.org/wiki/Beta_distribution
The one they describe there is defined on a support of [0,1], so it is perfect for your problem. That beta distribution has a mean of
alpha/(alpha + beta)
so as long as the two distribution parameters satisfy the relationship:
0.6*alpha = 0.4*beta
then the mean will be 0.4.
Since you seem to want a unimodal distribution, then they both need to be greater than 1 too. But that does not restrict things by a lot. There are still infinitely many distributions that will do as required. Conveniently, the stats toolbox beta distribution is also defined on a support of [0,1], so that is good. Here are a few distributions that all have the necessary properties:
fplot(@(X) betapdf(X,1.6,2.4),[0,1])
hold on
fplot(@(X) betapdf(X,2,3),[0,1])
fplot(@(X) betapdf(X,4,6),[0,1])
fplot(@(X) betapdf(X,6,9),[0,1])
fplot(@(X) betapdf(X,10,15),[0,1])
grid on
legend('[1.6,2.4]','[2,3]','[4,6]','[6,9]','[10,15]') 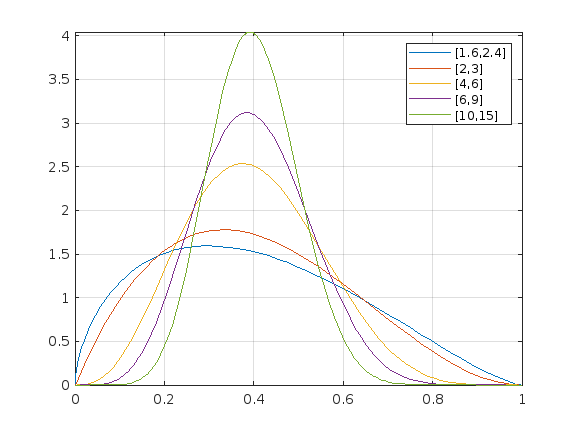 Again, as long as alpha is exactly 2/3 of beta, then the mean will be 0.4. There would be no beta distribution where the mode AND the mean will be exactly 0.4, but as the parameters grow large in that ratio, the mode will approach 0.4 asymptotically.
I could surely do something similar for a truncated normal distribution or many others, or I could hack up an example with the mode and mean both at 0.4, though that would require me to think for a few seconds more, and it is still too early in the AM here for the brain cells to fully function.
Still, the fundamental problem is you have not said enough in your requirements. Pick any of the distributions I have shown, and they will all have a mean of 0.4, and the mode will not be too far from 0.4 either. They are all unimodal distributions.

⋮
Thank you for this specific and insightful answer. My main goal is the create a schedule overrun for a construction project. I have different work items and for each work items, I have few risk items. I want to calculate the probabilistic cost overrun of the projects but as I previously said, I need to do it in a random manner. What I have planned is that I randomly generate around thousand of values between 0 and 1 for every risk factor and with multiplying those values with the schedule overrun of that risk event (for ex, 8 days if there is fire), I would obtain the probabilistic value for that risk event's schedule overrun for the selected randomly generated number (for randomly generated probability of 0,1 ==> schedule overrun will be 0,8 days for fire while for randomly generated probability of 0,2 ==> schedule overrun will be 1,6 days for fire) .I will do this for thousands of time and obtain a histogram. Then I will combine that with starting point end points etc but that part I know how to do. The main thing I want to do is for ex, I found prob. of fire occuring is 0,2, obtained from the survey I have conducted. The randomly generated values would be close to that. Like, average of the all randomly generated numbers would give something close to 0.2.
I understood your point saying for ex, Beta distribution, you can create infinite pdf with mean having 0,4 and start and end points with 0 and 1. One thing than I am not sure about your suggestion that can I use values obtained from one of that graph as randomly generated. I am new to this topic and as far as I know, Monte Carlo Simulation requires random samples. So by doing this, would I be doing something against the randomness required for MCS or does MCS even require such thing?
Lastly, thank you so much if you've read until here and I was thinking about simplfying my though process and instead of trying to find such a function, I can decide intervals which the random number generater can generate its numbers. For example, for the probability found as 0,2 by surveying; I can randomly generate intervals between 0 and 0,4, but I am afraid whether it would be too deterministic to be probabilistic. 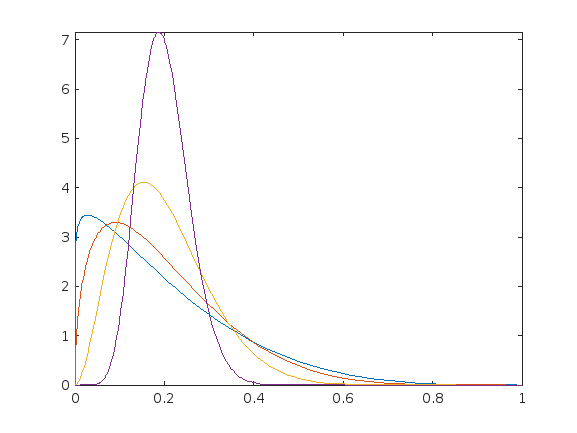