Small-signal analysis approximates the behavior of a nonlinear power electronics system, such as a switched-mode power supply, with a linear time-invariant (LTI) model that is valid around an operating point of interest.  Small-signal analysis is an enabling step to apply classic control theory to power electronics systems, which requires an LTI representation such as a transfer function or a state-space model of the system.

For well known, simple topologies such as a boost or a buck converter, you can derive their equivalent LTI systems analytically. However, for nonstandard converter topologies and for converters integrated in complex power-electronics-based systems analytical derivation becomes very time-consuming and error-prone.

An industry accepted approach to do small-signal analysis is to build a simulation model of a power electronics system, and then use frequency response estimation. Frequency response estimation starts with superimposing a small perturbation signal of defined amplitude and frequency content to the input of the power electronics system around the operating point and measuring the system response to this perturbation. You then use perturbation signal and measured output signal to compute the frequency response or a transfer function that represents the system dynamics in the vicinity of the operating point.

Small-signal analysis for a boost converter. Boost converter is modeled in Simscape Electrical and Simulink (top). Simulink Control Design is used to inject a sinestream perturbation signal into the model (bottom left) and compute the frequency response (bottom right).

You can inject different types of input signals into a model to compute frequency response:

Once you have computed the frequency response or a transfer function of the system, you can design a compensator and evaluate it against the linear model. By repeating small-signal analysis for different operating conditions (for example, different desired output voltage levels or different duty cycle ratios), you can develop a gain-scheduled controller to operate the power electronics system across the desired operating range.

Using Simulink, you can: 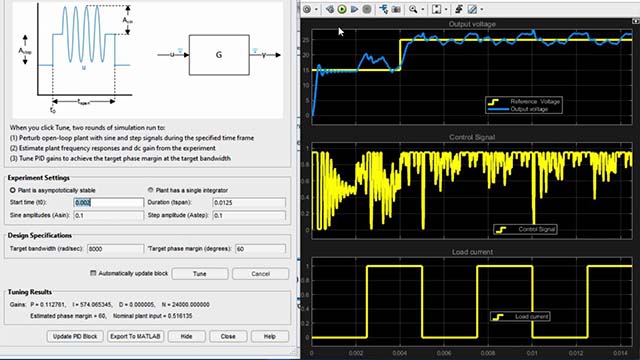 Estimating the Frequency Response of a Power Electronics Model

Go from basic tasks to more advanced maneuvers by walking through interactive examples and tutorials.

Get a Free Trial

30 days of exploration at your fingertips.