in ℂ, I want to know under what conditions for a and b, all polynomial roots lie on the circle center (0,0) radius 1.
I started off with
syms a b
p = [1 a b];
roots(p);
r = roots(p);
So that r(1) and r(2) are the roots of my polynomial (z_1, z_2).
Now, these solutions lie on the unit circle if and only if their distance to the origin (their modulus) is less than or equal to 1.
According to MATLAB Documentation, the abs() function returns "absolute value and complex magnitude", but when i try
abs(r(1))
MATLAB isn't really taking into consideration that this number can be a complex number and just returns a positive version of itself.
What am I doing wrong or not considering?
P.S. I know this is something which can be done off by hand, but I also want to learn MATLAB, not only solve my problem.

⋮
Edited: Basil C. on 14 Mar 2021
a and b are defined as sym variables, unless you assign them the values such that

you won't get complex roots.

⋮
@Be Matlabi
The question indicates that

so the roots could be inherently complex.

⋮
@Walter Roberson if a and b belong to complex set then problem gets a bit complicated, however i suppose the question indicates roots of f(z) are complex

⋮
A polynomial belongs to ℂ if at least one coefficient of expanded series is not real-valued. A polynomial is not said to belong to ℂ if it has real coefficients but variable happens to be complex.

always has roots in complex field C.
Let p and

are its complex roots,
then product of roots is

Hence for any real value of a such that

Complex roots that are not complex conjugate, but are on or inside the unit circle.
R = fliplr(coeffs(F(z), z))
R =

The two parts are complex; one is not less than or greater than the other.

No constraints on a and b so far here, these are the roots. But since a and b could be complex, we want to know if the roots lie in the unit circle. And that rquires they must have magnitude less than or equal to 1. We can get the square of the magnitudes as simply:
zmag = expand(diag(zsol*zsol'))
zmag = 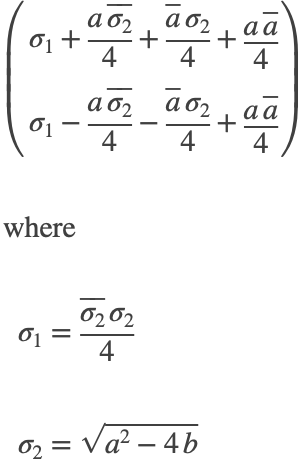 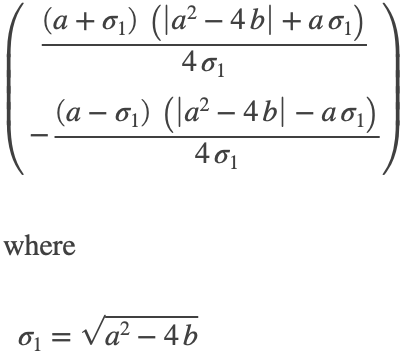 That result is much simpler. Now a little effort would allow you to plot the region of interest.