What information is conveyed by the different colors in Matlab's contourf( ) data plots?

Noob on 24 Sep 2020
⋮
Edited: Abdolkarim Mohammadi on 24 Sep 2020
Accepted Answer: Abdolkarim Mohammadi
Hi,
Matlab has a contourf( ) function, which I used a little bit last night to plot the level sets of say,
Z = f(x,y) = x*cos(y)
I called the contour function using one of Mathworks examples, so I used
contourf(X,Y,Z,10)
axis equal
on an evenly-spaced x-y meshgrid.
What do the various colors represent in the contourf( ) plot?
There's no labeling, like, say, a colormap would provide.
My motivation to plot a function's level sets is to then overlay it with plots of convergent sequences xn (maybe with an "x" marker), converging to roots of the function (using some simple methods like gradient-descent and Newton's method that I've been playing with). Namely, I notice that two algorithms may converge to different roots, when starting from the same initial guess -- so I think it would be interesting to visualize this difference and get better intuition for the geometric aspects of various root-finding algorithms.
Thanks, 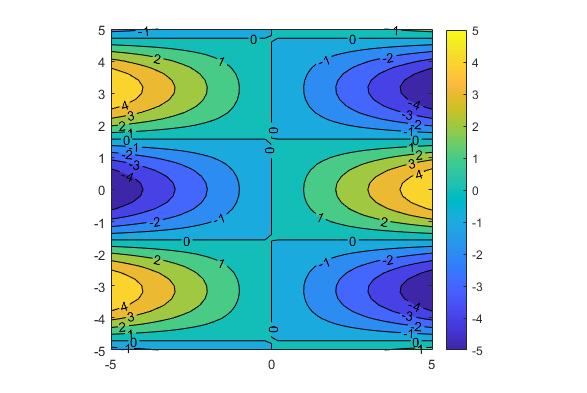