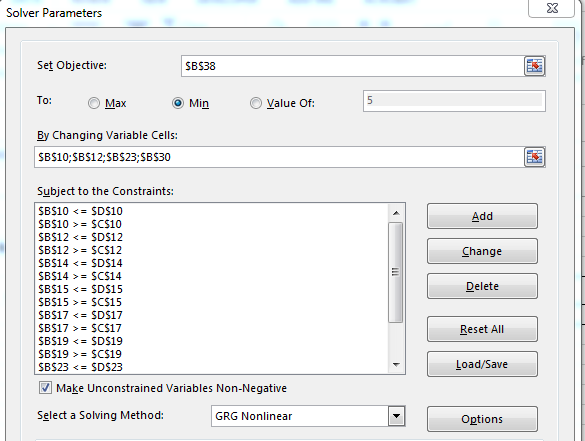 Thank you for any help.

⋮
fmincon(fun,x0,A,b)
Refer to documentation, with ~~variables A and b, you supply inequalities.~~
Edit: I am sorry, I made a silly mistake suggesting you inequalities. Better option is to use bounds as Fabio suggested.

⋮
Awesome, thanks a lot for this extensive answer. It works very well.
While implementing it, however, I found that I oversimplified my problem. I will accept your answer as it solves the question I asked perfectly and extend my question below.

dev3011 on 4 Mar 2020
⋮
Edited: dev3011 on 4 Mar 2020
Fabios answer solves the problem I posted very well. However, I realized that I oversimplified my problem. Actually, some of my boundary conditions are functions rather than independent variables.
Let's assume I have the two following functions:
f = ((a-real(0.5*(a-(sqrt(a*(a-4*b))))))*(b^2))/((b^2)-(1.22*(0.0004)*(1-(c)/(a))));
d = ((a * b)^2)*g % In reality this function is more complicated
and I now want the boundary
10<d<100
to be satisfied. Thus, my boundary must be satisfied for a function that is not directly included in my initial function to be minimized but depends on independent variables of this function.
I guess I could solve every one of these boundary functions for the independent variable and then pass the result to fmincon() as a boundary condition. However, as the boundary functions are quite complex this would not be feasible. Is there any way I can pass a linear boundary function like above to fmincon()?

⋮
fmincon allows the use of nonlinear constraints
look at the documentation
x = fmincon(fun,x0,A,b,Aeq,beq,lb,ub,nonlcon)