Greg Lawrence on 8 May 2019
⋮
Commented: Greg Lawrence on 16 May 2019
I have MATLAB R2019a (9.6.0.1099231 Update 1) recently installed on a Windows 7 64-bit Thinkpad (including Bioinformatics and Statistics and Machine Learning Toolboxes, which I do not think affect the result here).
Whenever I try to create a new project, either via New->Project->Blank Project or command Proj1 = matlab.project.createProject, my MATLAB session appears to go into an endless loop (high CPU seen on Windows Task Manager) which cannot be stopped using Ctrl+C or Ctrl+Break, and eventually requires the MATLAB process to be cancelled completely (losing anything unsaved).
A directory tree appears to get created right away in ../MATLAB/Projects, but all sub-directories are empty, and no *.prj file can be found anywhere (either during the endless loop, or after cancelling).
Is there some trick (or not-so-obvious dependency) needed to get the new (with R019a) projects functionality to work?
Thanks in advance - Greg.

Pruthvi Muppavarapu on 15 May 2019
⋮
Hi Greg,
System requirements not being met might be one of the probable cause of the issue. You could refer to the below link to check the system requirements of MATLAB R2019a:
https://in.mathworks.com/support/requirements/matlab-system-requirements.html
Hope this helps.
Regards,
Pruthvi

⋮
Hi,
As far as I know the listed requirements are met, although this laptop does not have a specific graphic card: 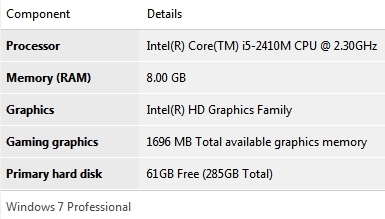 The listed dependencies do not mention Java - which is apparently used by the Matlab UI - so I am not sure how to check if that is a factor (I believe my Java is automatically updated).
For now I have given up on using the new project functionality - it SOUNDS ideal for how I like dealing with multiple source files/projects (similar to RStudio projects) if only I could get it to work as documented.
I do not have/use Simulink, but am thinking of installing it just to see if the projects functionality of Simulink might be workable instead.

⋮
I am having difficulty tracking down exactly which model you have. One of the 220 series seems most likely such T220 or Edge 220 or GV220. I am not finding a match on your hard drive size; levano denies ever having one that size, talking about 160 or 320.
At the moment it is trending towards Intel hd 3000 as your likely graphics.
I recommend CPU-Z to gather real information about your system. https://downloads.tomsguide.com/Z-CPU,0301-3347.html

⋮
It is a Lenovo Edge E320, with the only hardware update being an upgrade to 8GB from the supplied 4GB of RAM.
CPU-Z 1.88 shows the following for Mainboard: 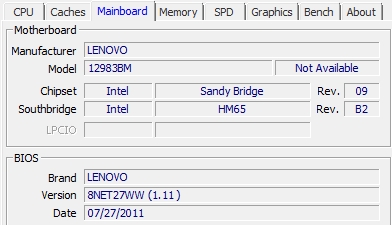 CPU-Z 1.88 shows the following for Graphics. I cannot see anything about Intel HD 3000 as such - I think it has the base Intel (Sandy Bridge) Integrated HD Graphics:

I cannot see how to get CPU-Z to show hard disk info, but Lenovo Tools shows the following:

It is supposedly a 320GB hard drive, but also has an approx 12GB recovery partition, so I presume the 285GB which Windows reports for the primary hard drive partition is the useable/formatted amount.
I did try reinstalling the machine's version of Java (JRE) to match the backlevel JRE version supplied and (presumably) used by MATLAB - Java 1.8.0_181-b13. This did not appear to change the result (loop/freeze on createProject), although I did have to cancel MATLAB the first 2 attempts after the reinstall, since it stalled/froze twice during startup.