said kiram on 10 Dec 2017
⋮
Commented: Walter Roberson on 11 Apr 2018
Hello I want you to help choose a camera that I can connect with the Matlab and is characterized by fast and high accuracy and that is for use in the project   The sorting of objects exists in a fast moving motion

⋮
What framerate do you require?
Does it have to be USB or could it be gigabit ethernet?

ABHILASH SINGH on 3 Apr 2018
⋮
You can check this https://in.mathworks.com/matlabcentral/fileexchange/66584-object-detection-using-deep-learning-in-matlab?s_tid=prof_contriblnk

⋮
However, these would not typically be "characterized by fast and high accuracy" as required by the Question.

⋮
It depend upon the quality of the camera that is available in your phone.

⋮
You missed the "fast" part of the question.
See for example https://www.speedguide.net/faq/what-is-the-actual-real-life-speed-of-wireless-374 which says that for 802.11g that typical transfer rates are only about 20 Mbps.
On my smartphone, the default image size is 9.6 megapixels, and each of those pixels is 3 bytes (RGB). If that were uncompressed that would give you 9.6E6*3*8/1024/1024 = 219.7 megabits, which would be about 1 frame every 10 seconds. With compression of course there is the potential for considerably more frames per second. Typical PNG lossless compression ratio is about 2.7:1, which would get you down to about 1 frame every 4 seconds.
Since "fast" was required, suppose we say that 20 fps is the requirement (because 10 fps is decidedly not fast -- typical video rates are 24 to 30 fps but for the sake of argument suppose we are willing to tolerate a bit low of a meaning of "fast".
Okay, so to go from 1 frame every 4 seconds to 20 frames per second, we would need to be transferring 1/80th of the data. But that's into lossy compression now. So we go back to the original data rate. 20 fps in 20 Mbps requires an average of 1 megabits per frame, which would about 220:1 lossy compression ratio.
According to https://www.graphicsmill.com/blog/2014/11/06/Compression-ratio-for-different-JPEG-quality-values,
"I decided to check compression ratios for JPEG values in range [55..100], because lower values are not looking acceptable for the most of the users (too strong artifacts)."
and for QI=55, Andrew found an average compression of 43.27:1 . So to get 220:1 would require 5 times more compression than the value reported as unacceptable.
What might it look like? Well it would be compression to 1/2 of 1% so it would be worse quality than the following example from wikimedia: 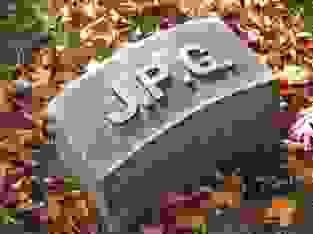 ⋮
Most Canon, Nikon, and Sony consumer cameras cannot be used for webcam work over USB: they generally either cannot do live work at all or are limited to streaming a copy of their viewfinder (at its resolution, not full camera resolution) over HDMI and you would need an HDMI capture board to capture that.
Some of the newer Canon can handle live streaming over WiFi; Rebel X1 is the model that comes to mind, but I would need to check that. I have posted before listing the webcam support for Canon cameras. Except for those high end prosumer models, about the best you can do on Canon is streaming the viewfinder, or wireless remote control to trigger individual frames and then later connect the camera to USB to transfer the frames.
I have also posted before listing the webcam support for Nikon and for Sony. One of the two (and I do not remember which at the moment) had no webcam support in their consumer camera lines the last time I checked -- I think it might have been Nikon, as I seem to recall that Sony has created a "Go Pro" equivalent line (and is otherwise pretty weak on webcam support.)
Sony makes industrial USB cameras with webcam support. The higher speed models are, I seem to remember, mostly greyscale.
Note: I do not deliberately keep up with the model offerings from those three manufacturers, but from time to time I answer questions about their support of webcam, so from time to time I go through their lines to see what they can do. The manufacturers might have created new models since I last looked at their offerings.
If you want high speed color, then you are going to need to either go with Sony Industrial, or with some other manufacturer other than those three -- though the Sony action cameras might perhaps have high enough frame rate for you. But if you are thinking of one of the Nikon consumer cameras, or are thinking even as high as a Canon D800, then forget it: you need higher end than that in the Canon line.

⋮
What do you think of the GoPro ?

⋮
I do not have experience with GoPro. I see that some of the models are rated up to 240 frames per second of NTSC at 1920 x 1280.
A method of live streaming of some GoPro cameras is shown at https://www.mathworks.com/matlabcentral/answers/171275-how-to-access-gopro-live-streaming-using-image-acquisition-tool-through-wifi and see https://www.mathworks.com/matlabcentral/answers/295471-is-matlab-function-videoinput-or-other-functions-able-to-real-time-process-with-gopro-video-data . I see some people mentioning Hero3 as being usable for direct webcam streaming to MATLAB but I see doubts about models after Hero3. I have not read through the product manuals.
If someone were to send me a GoPro, I could experiment ;-)

⋮
I mean the words * speed * When I give the order to take a picture and the walk moves the picture is clear. And look for available market sizes for a university project