Jessica on 12 Aug 2022
⋮
Commented: Star Strider on 22 Aug 2022
Accepted Answer: Star Strider
I want to extract different waves in EEG signals and quantilize their absolute power. However, some errors impeded my way of further exploration.
[header,data] = edfread("preprocessedEEG.edf");
S = data;
y=fft(S);
Then, an error came as "Error using fft Invalid data type. First argument must be double, single, int8, uint8, int16, uint16, int32, uint32, or logical."
Totally have no idea of the error. Is that because of my EDF file had some "NaN" data? or I just misused the fft function? How can I move on my analysing? I really need your help.

Star Strider on 12 Aug 2022
⋮
According to the edfread documentation, the ‘data’ are the first output, not the second.
The assignments should probably be:
[data,header] = edfread("preprocessedEEG.edf");
instead. (I cannot test this since I do not have the file.)
.

⋮
Ran in:
Thank you,Star Strider. But I feel sorry that it still doesn't work after changing the sequence, still the same error. Besides, I tried using another syntax in edfread and the same error appeared, too.（And I took a reference on another user's code, I thought it was probably the fft function that went wrong.How to load a specific channel from EEG into MATLAB - Help Center Answers - MATLAB & Simulink (mathworks.cn) )
data=edfread(“preprocessedEEG.edf”)
Invalid text character. Check for unsupported symbol, invisible character, or pasting of non-ASCII characters.
Error in connector.internal.fevalMatlab

⋮
Edited: Star Strider on 13 Aug 2022
I did not look closely at the argument and so I thought initially that you were referencing it as a string with double quotes (") rather than a character array with single quotes (') so I did not change that. Note that the actual double quotes (") is not the same as double single quotes ('') and not the same as quotes created as char(0145) (‘) and char(0146) (’). Only single quotes (') defining a character vector or double quotes defining a string (") will work.
Aside from that, it is necessary to assign the outputs correctly and then refer to the correct outputs in the fft call.
Try this instead —
data=edfread('preprocessedEEG.edf')
EDIT — (13 Aug 2022 at 16:42)
Added corrected edfread call.
.

⋮
Thank you, Star Strider and Roberson. I do learn some knowledge from your answers, though it still didn't work when I ran the fft code.Anyway, thank you all!!!I will try to find other solutions to my problem.

⋮
Our pleasure!
For help with the fft calculation and plotting, see for example FFT from .csv voltage and current data file although having the file you are working with would be helpful since I have no idea what is in it or how to prepare it properly as input to the fft function. If you can attach it or use zip first it is too large to upload directly, I might be able to help with it.

⋮
Okay. Because my raw data is too large to upload even after zipping, so I cut down a part of it and only upload an incomplete part.

⋮
I'm sorry for my mistake and I tried to put the file into my mailbox link, with blue button meaning "download". And the sampling frequency(or sampling rate?) of my data is 256Hz(see the attached figure).
Here's the data link:
preprocessedEEG.edf
Fig 1. 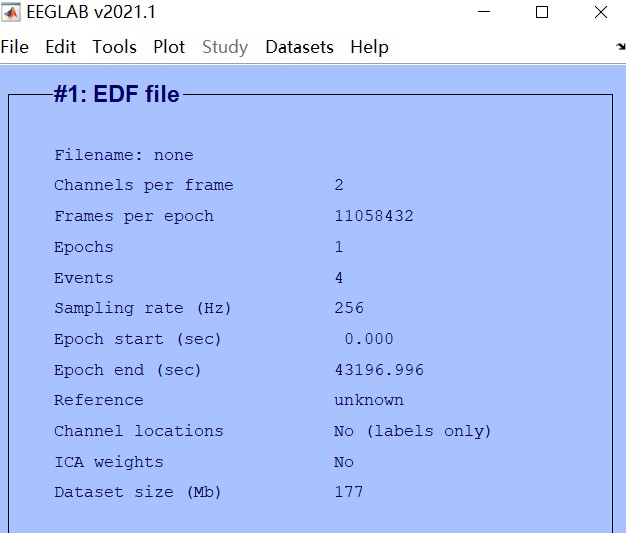 ⋮
No worries! I just want to get this working if I can.
I’ll look though the file in the morning. It’s the end of my day here (UTC-6 summer time).

⋮
[header,data] = edfread("preprocessedEEG.edf");
That is not the output for edfread(). The first output is always the data, and the second (optional) output is annotations.
data = edfread("preprocessedEEG.edf");
returns a 43197x3 timetable, in which each entry is a cell array of 256 x 1 double.
I have lost track of what the question is, beyond the problem of reading the data in, which edfread() is doing.

⋮
It's so nice of you two, Strider and Roberson, to focus on my problems. My initial question is that I can't use fft function to process my EDF file("Error using fft Invalid data type. First argument must be double, single, int8, uint8, int16, uint16, int32, uint32, or logical.") And you two corrected some other errors which was the base of my further steps. Now I understand where my initial problem generated. It was because that fft() can only read vector, matrix or other sequence of actual numbers instead of my timetable from the EDF file. I’ll try to find solutions of transforming my data type(Or, if you know the answer?:-) .
Thank you again,
Sincerely,
A novice to matlab.

⋮
To Strider: Fp1 along with Fp2 means two electrodes and status represents the mark of artifact rejection, a step of pre-processing. Since my data was in time domain, I want to transform it to frequency domain and extract absolute power of certain waves(e.g. α wave is 8-13Hz and absolute power of ot is 10uZ2). But it went wrong at the first step.Whether I use fft function or wavedec toolbox, the error went as that I can't use timetable to run the code. So, as Roberson has pointed out, I just want to transform the data to a numeric array.
To Roberson: Yes. That's exactly what I want to do with the data.

⋮
I’m so moved about your code and don’t know how to express my appreciation. I spent quite a long time reading your code. But I am still a little confused about the code:
1) You labeled Y axis as “amplitude” in FFT Filtered 8-13Hz figure while using the equation “abs (FTs (Iv,1))*2” to calculate it. I guess that maybe you mean “EEG power (unit=uv2)” rather than “amplitude (unit=uv)”. Is that right?
2) why did the third “Original” figure differ from the fourth “8-13Hz Filtered” as they both went through FFT? What's the meaning of number in “(lv,1)” in the code “semilogy(Fv, abs(FTs(Iv,1))*2)”?
Plus: I’ve already bandpass-filtered this data from 0.01Hz to 100 Hz using EEGLAB toolbox before, so the artefact above 100Hz may be the result of my former process.

⋮
I am happy it works for you! I had to figure out what was in the file and how it was organised, then the rest was straightforward. That is an unusual way to store data and I have not previously encountered it, however it definitely makes sense if the objective is to examine each second or group of consecutive seconds easily.
I plotted amplitude (or magnitude). To get power, simply square it, so for the first subplot —
semilogy(Fv, (abs(FTs(Iv,1))*2).^2)
to get power, and similarly for the others. Another way to do all of them at once is:
FTs2 = abs(FTs*2).^2;
Then the first subplot would be —
semilogy(Fv, FTs2(Iv,1)))
‘why did the third “Original” figure differ from the fourth “8-13Hz Filtered” as they both went through FFT?’
I filtered the signals first, and then did the fft on all of them together since they otherwise all have the same characteristics. That is simply more efficient. I then plotted the various columns.
‘so the artefact above 100Hz may be the result of my former process.’
That definitely explains it! (I don’t remember seeing that mentioned anywhere previously.)
.

⋮
Strider, for the question 'why did the third “Original” figure differ from the fourth “8-13Hz Filtered” as they both went through FFT?', I just simply can't understand the meaning of index(=1,2,3,4) in the code 'semilogy(Fv, abs(FTs(Iv,index))*2)'. What does it mean?
(e.g. Index=1 or 3 both mean the filtered FFT fp1 electrode, but why does their plots seem so different?)

⋮
The first two columns of the argument to fft are the original vectors, and the last two are the filtered vectors. This is also reflected in the output. So column 1 is ‘Fp1’ and column 3 is ‘Fp1_filtered’. Columns 2 and 4 are the same for ‘Fp2’. The plots are different because the first is the original and the second is filtered. The fft plots of the filtered signal demonstrate the effect of the filtering.

⋮
Alright,I get it now! Thank you so much for your patient and timely guidance and instructions! I nearly lost hope before asking questions in this forum, but now I gain a lot of motivations and basic knowledges to continue my learning. Many thanks to Strider, and also, Roberson!

⋮
As always, my pleasure!

⋮
Strider, I came across another question. How can I perform a 'window' to fft in order to reducee the frequency leaking problem?
ps: I saw someone claiming that a rectangle window was added to your signals even when you did nothing on fft settings. Is that true?

⋮
Edited: Star Strider on 21 Aug 2022
The easiest way to do a windowed Fourier transform is to use the Signal Processing Toolbox stft function. That’s what I do when I want to do windowed Fourier transforms. There are other ways, however it’s been so long since I‘ve used them, that I¹ve forgotten how to code it.
I don’t believe that performing the fft automatically selects any kind of window, since the transform is done on the entire vector. The purpose of windowing is to correct for the discrete Foirier transform not being infinite.
EDIT — (21 Aug 2022 at 15:06)
With respect to automatically windowing a Fourier transforom with a rectangular window, thinking about it further that’s correct, with the window being the length of the time-domain signal. (I don’t generally consdier that, however it is technically correct.)
I’ve not done a wondowed fft in a while, so I had to go back through the archives (finding it in a code example from six years ago).
The window must be the same size as the vector, so for example:
FTs = fft(hamming(L).*[datamtx datamtxfilt_8_13],NFFT)/L;
This should probably work. (Choose the window of your choice. The window functions I looked at all produce column vectors, so the multiplication is straightforward.)
I did not test this particular example.
.

⋮
Thanks, Strider! It really helps! The different windowed fft figures are as follow. And I decide to adopt hann/hanning window since it is reccommended by many people and articles.

⋮
As always, my pleasure!