Eric Roden on 27 Jun 2022
⋮
Edited: dpb on 28 Jun 2022
I want to create a contour plot that shows two different data sets (chemical concentrations vs. depth and time in a lake), each with it's own color scheme and colorbar. There must be a way but I have been unable to figure out how. Thanks!

⋮
Well, I can see why...I can't visualize how you would put those two together on one plot, either.
Can you sketch by hand a representation of what you visualize this would look like?
Or perhaps you have a reference from a paper/text that you're trying to duplicate?

Walter Roberson on 27 Jun 2022
⋮
You will need to use two different axes, as only one colormap can be active per axes. The two axes can be in the same position.
Alternatively, you can plot one, and then use File Exchange freezecolors() to lock it in to rgb, after which you plot the other with a different colour map. You would, however, need to draw the second colorbar yourself.

⋮
That's what yyaxis does; creates two axes on top of each other...or you can simply do so by
hAx=axes;
hAx(2)=axes('position',hAx.Position','color','none');
as the most basic.
But, I still can't see how two countour plots on the same axes aren't going to clash violently with each other and not just make a mess...

⋮
I am not sure at the moment whether you can have separate colormaps for the two axes of yyaxes.

⋮
I'm not either, Walter, which is why I pointed out the old way of effecting the two axes overlaying each other.
I did build two contour plots on those two axes and assigned colorbar to each; one will have to do some more machinations to keep them from laying on top of each other by adjusting their positions to also not overlay and make room for two in the same figure space, but can be done.
But, the two on top of each other was, as expected, just a mess...not much value as a graphic.
ADDENDUM: Just tried same experiment with yyaxis -- doesn't seem to work to even display the two contours to be able to see both; the second occludes the first. There is only one axes; there are two YAxis NumericRulers for the two sides but colorbar won't accept them as a handle.

⋮
"I still can't see how two countour plots on the same axes aren't going to clash violently with each other..."
That wasn't written as clear as could/should have been--intended to refer to the two axes option shown where the two overlay each other, not the yyaxis option that is, fundamentally, still only one axes.

⋮
Dear dpb and Walter, thanks very much for your continued thinking and input about this. I downloaded freezeColors from File Exchange, and tried to implement in my code. I have pasted in the code below. Without trying to explain the details of what's being plotted in great detail, these are modeled distributions in space (depth) and time (julian date) of photosynthetic microorganisms that reside at different places with a lake water column, with the Cyanos above the Chlorob throught the modeled period. Although there will be some minor overlap between the distributions of these two groups, I believe they are sufficiently separated such that a contour plot that includes both with different color schemes won't look too bad. Although the freezeColors code excutes in the code below, I still only see the second group, i.e. the Chlorob, in the plot that is generated. I'm probably missing something simple to make this work, but am not sure what. Thanks for having a look as time permits. And again, thanks a million for thinking through this on my behalf. Eric Roden, Department of Geoscience, University of Wisconsin-Madison.
%% Overlay contour plot of Cyano and Chlorob concentrations
fh = figure();
%fh.WindowState = 'maximized';
set(0,'DefaultAxesFontSize',18, 'defaultlinelinewidth', 2,'DefaultAxesTitleFontWeight', 'normal')
asp1=4;
asp2=2;
asp3=1;
hold on
contour(t+139,x,Cyano,'showtext','off','fill','on','linewidth',2);
colormap(YlOrBr)
freezeColors
contour(t+139,x,Chlorob,'showtext','off','fill','on','linewidth',2);
colormap(YlGn)
%title('Biomass (\mumol C L^{-1})')
pbaspect([asp1 asp2 asp3])
xlim([139 229])
set(gca,'xtick',[139 169 199 229])
ylim([-0.001 7])
set(gca,'ydir','reverse')
ylabel({'Depth (m)'});
xlabel({'Julian Date'});
colorbar

⋮
We'd need the data to do anything useful, Attach a .mat file with the variables.

Eric Roden on 28 Jun 2022
⋮
Yes, agreed, understood. I have added the text files that generate the plots to a Google Drive folder that can be accessed at the link below, and pasted in below a modified script that would generate the overlayed contour plots. I specified the "winter" colormap for both plots (when/if they can both be made able to show up), as this will reduce any weirdness in terms of color mixing and at the same time should show two "peaks" in high values, one in the upper 1 m of the water column, and one starting at a depth of around 2 m. The key thing is to get both contour plots to show in the same figure, which is still not happening despite my inclusion of the freezeColors command. Thanks in advance for any additional help you can provide.
https://drive.google.com/drive/folders/19T1FUlnx4p2XZD15KbDF1NPzO4Y1l_sb?usp=sharing
%% Overlay contour plot of Cyano and Chlorob concentrations
loadfilename=fullfile('tout.txt');
t_out=load(loadfilename);
loadfilename=fullfile('Cyano.txt');
Cyano_out=load(loadfilename);
loadfilename=fullfile('Chlorob.txt');
Chlorob_out=load(loadfilename);
nx=700;
lx=70;
dx=lx/nx;
x=(dx:dx:lx)/10;
fh = figure();
%fh.WindowState = 'maximized';
set(0,'DefaultAxesFontSize',18, 'defaultlinelinewidth', 2,'DefaultAxesTitleFontWeight', 'normal')
asp1=4;
asp2=2;
asp3=1;
hold on
contour(t_out+139,x,Cyano_out,'showtext','off','fill','on','linewidth',2);
%colormap(YlOrBr)
colormap(winter)
freezeColors
contour(t_out+139,x,Chlorob_out,'showtext','off','fill','on','linewidth',2);
%colormap(YlGn)
colormap(winter)
%title('Biomass (\mumol C L^{-1})')
pbaspect([asp1 asp2 asp3])
xlim([139 229])
set(gca,'xtick',[139 169 199 229])
ylim([-0.001 7])
set(gca,'ydir','reverse')
ylabel({'Depth (m)'});
xlabel({'Julian Date'});
colorbar 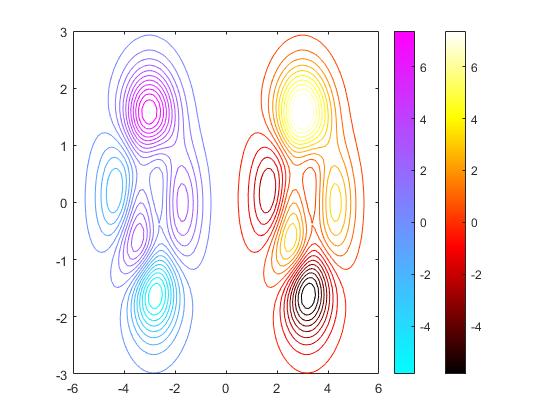 It appears could have done the resizing of the axes later, maybe to not shrink as much; I didn't play with refinements to try to optimize the use of real estate.
But, there are two contours in what appears to be the same space sharing axes and each with its own colormap/colorbar.
Salt to suit... :)

⋮
Dear dpg: Thanks for sending this. Just quickly though, I just grabbed your code and ran it, and produced the the attached...only one of the contours appears. Maybe it has something to do with the version of the software (R2020b) that I'm using?

⋮
Sorry about that..I had done just interactively at command line with several retracts/restarts and then pasted the sequence from the commandhistory window and subsequently tried to pick/choose the correct sequence and remove the missteps.
The key one I missed keeping is the hold on for the second axes after it is created with the 'Color','none' parameter -- the high level plotting commands like contour automagically reset a bunch of stuff into a new axes including the default color -- which when it gets set to [1 1 1] is opaque and so occludes the bottom layer of the first axes showing through. It also resets ticks and all which is what screwed up the legends.
If you will execute
hAx(2).Color='none';
while you have that previous figure as the current figure, you'll see the other contour/axis content show up -- it is there, just occluded. This is a key point to get in doing these kinds of machinations with HG2 which one ends up doing way too much of with MATLAB.
I fixed up the script above making just a couple of minor refinements along the way, but it did produce the desired end result when I did run the actual code above.
NB: The above doesn't fiddle with the 2nd axes y range nor move the YAxisPosition to the RHS side; you may want to do that, your choice to show other ticks/tick values on right, too, or not.