Passing one value at a time

Any help is appreciated. Thanks in advance.

⋮
@Sugar Mummy commented: This is still giving dimensionality error because the other parameters (say B,C,D...) are a constant value that's why I need a code that take one constant value at a time.
Your help would be appreciated.

⋮
Show us your code which gave this error.

As told earlier the other parameters have constant values but 'A' parameter need multiple values that should be executed ONE AT A TIME.

⋮
Simulink can receive individual values from MATLAB in at least two different ways:
In the first case where you are using set_param() then the name of the parameter in the block has no connection to the name of the variable in the MATLAB workspace. You could set the parameter name 'blkgain' from the content of the MATLAB variable elephant_toes(K) and Simulink would not have to care that the name of the parameter and the name of the MATLAB variable are different.
In the second case where you are changing workspace values, then you have a potential problem: the workspace variable that is changed must match the variable name used inside the Simulink block (such as in a Math block, or an initialization mask). If your simulink block has A.*B+C and you want to iterate through different A values, then you would need to change the MATLAB variable A .
And that could be a problem if A is also the name of the MATLAB variable that also holds all of the values. You cannot somehow tell Simulink to use the "currently selected" value out of the matrix A and somehow tell MATLAB to "select" a particular location inside A for Simulink to focus on. That will not work.
Instead, you are going to have to rename the aggregate variable that has all of the values, so that it does not match the name used inside Simulink. So for example,
All_A = A;
for K = 1 : numel(All_A)
%MATLAB workspace variable |A| must be changed to the single value that
%Simulink is to work with this time
A = ALL_A(K);
sim(whatever);
end
A = ALL_A; %restore after

⋮
Hi,
Thank you for the response @Walter Roberson. I am not using the variable 'A' it was just for the example.My variable name is 'IR'. Therefore, as per my understanding All_A = IR so what would be 'A' then? Otherwise it would be a undefined variable error.
Btw, I am working on Simulink where I am creating a variable on model workspace, also modifying the code in it to pass each value one at a time while other parameters are constant.
Thanks in advance.

⋮
All_IR = IR;
for K = 1 : numel(All_IR)
%MATLAB workspace variable |A| must be changed to the single value that
%Simulink is to work with this time
IR = ALL_IR(K);
sim(whatever);
end
IR = ALL_IR; %restore after

⋮
@Walter Roberson I tried exactly this way as well but my problem is still giving the same error i-e- dimesionality issue!

As shown in the figure below the All_IR dimension is 5x1 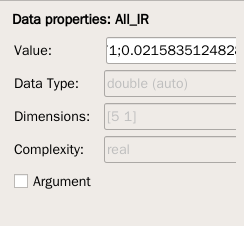 But the IR variable (the main one) value is 1x1 which means that it is taking ONLY the last value of loop. 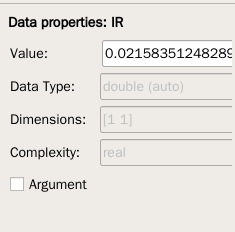 Could you please guide what could be the reason.

⋮
No computer language can do what you want. The IR variable cannot be simultaneously only a single value (to avoid dimension problems) but also all of the values together.
In terms of the loop I showed before, you would typically record the output of the sim() call, and extract values from that, and store them at the MATLAB level; after the for K loop you would then have the overall results.

⋮
@Walter Roberson Thank you so much . The sim() command worked for me.
Last thing I want to ask is that Scope is saving only the data of last value of IR and not the overall loop values data. Could you please help me in this.Thanks!

⋮
No, I do not know of any way to get a Simulink Scope block to save values from previous runs.
I recommend saving the outputs at the MATLAB level and plotting them at the MATLAB level.
All_IR = IR;
for K = 1 : numel(All_IR)
%MATLAB workspace variable |A| must be changed to the single value that
%Simulink is to work with this time
IR = ALL_IR(K);
simOut = sim(whatever);
output_wanted{K} = find(simOut, 'VariableYouWantTheValueOf');
end
IR = ALL_IR; %restore after
outputs_as_matrix = cell2mat(cellfun(@(C) C(:), output_wanted, 'uniform', 0));
plot(ALL_IR, outputs_as_matrix)
except that you might need to record another axis of values and use plot3()

⋮
@Walter Roberson
The command
output_wanted{K} = find(simOut, 'VariableYouWantTheValueOf');
is not working for me as I have multiple(12) variables attached to the scope.
Can you please help anything relatedly so I can store the whole Scope data in Simulink. Thanks!

⋮
Thank you for the help!