Match Block Sizes in Simulink (2021b)

⋮
100% agree with this post! I'm very surprised at the loss of this feature. Slightly broader point - whoever from Mathworks is reading this, kindly read the following for feedback:

⋮
Edited: Kristian on 29 Nov 2022
I completely agree. The feedback from Rahul could have been mine. This is ... sorry for saying that so clearly ... complete crap. Mathworks is doing the same mistake which Microsoft did a few years ago with regards to a very similar topic. They moved some very useful buttons to the ribbon where you actually don´t need it because you need it where you work. I think that one argument for this change was that Word and Excel are no design tools or something. No, it is not their main purpose but having such tools helps a lot either, and it does not hurt keeping them. And the second argument that you get used to it over time ... this is simply not true. I still struggle with it every day because it is neither logical nor natural.
Same here now with Simulink. The editors of Simulink and especially Stateflow have never been a showcase of ergonomics and intuitive handling. In the past years finally some things have changed and became better. This also applies to e.g. 2021b vs. 2020b. But why is that coming along with such unnecessary setbacks? It was not even displaced by other things but actually just removed. Why? Do the designers of the editors work with them themselves? Obviously this is not the case. Else they would not have excogitated such ideas. It is not jsut about shortcuts (which I have used for years as well because it makes it really fast and easy). I know that shortcuts are not everyone´s favorite. But it´s also the other point which Rahul mentioned: It´s too complicated to always change the bloody ribbons, to serach for the symbols, to move the mouse there, to move the mouse back and to lose track of the own programming thoughts. This is so annoying.
And the worst thing comes now: It even does not work in all cases: Can anyone tell me how to match a size of 2 objects? In the past it was clerly depending on the order of selection resp. on the final click. That was intuitive and easy. But now there does not seem to be a rule. Today I have tried to match the size of 2 objects for a few minutes until I gave up. It was not possible to give object A the same size as object B. It happened the other way round. Always. I have tried everything* I would say. Order, clicks, position, distancees, ... it did not help. And actually it cannot perfectly work because you cannot start the action with a clear and easy reference to the sample object. This can only be reached by a right-click. Even a last selection is not the same because you cannot easily change it.
So again: Yes, Simulink and Stateflow are very powerful tools which do a good job – if you are able to tell them what to do. They don´t need to win prices for the best sketching tool ever but it´s very clear that the user interface is a main and very important piece of the total tool. I have my washing machine in mind. It cleans my clothes better than every other machine. Now I get a new one. It´s a bit more silent, maybe not that heahy and it tells me when I take the wrong cleanser. Nice. But unfortunately I always need to use a screw driver to remove 8 screws which fix the cover of the control panel before I can select the washing program. And I need to attach all 8 screws again before I can finally start the machine. Simulink 2021b is such a new washing machine in parts. Unfortunately.
Please change it back. Within 2021b. Not with a new release only.
Edit 22-11-29:
*) Everything but one as it seems ... the last step has to be a right-click on the reference item. Then it works. So there is a way but it´s still not more than a workaround because you still have to go to the ribbon which is very annoying. 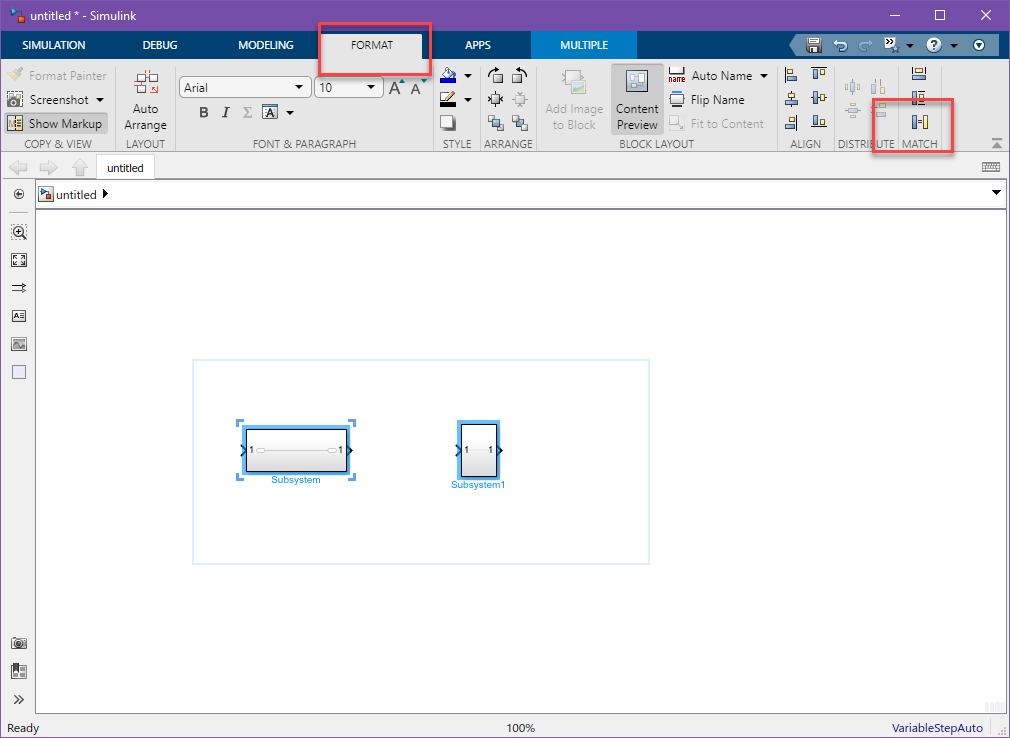 ⋮
How do I move this back to the Right Click > Format menu? Moving this to a Format tab seems pretty unnecessary.

Erin McGarrity on 9 Dec 2021
⋮
You can find it in the Format Tab after selecting multiple blocks.

⋮
How does it know which one to size it after?

⋮
If you select multiple blocks, it uses the last one you select as the sizing guide.

⋮
I have found it in the menu how you stated, but it is taking me longer to do the same thing I've done before in previous versions of Simulink, since I need to go up to this menu and hover over the icon to tell what it does. I've become accustomed to being able to right-click and choosing it from the menu. This seems to take longer to do, hence it wastes my time. Is there a way to get the arrange and distribute menus back into the right-click dialog?

Scott Tatum on 9 Dec 2022
⋮
So I asked this question for 22b (cause it still isn't there) with the specific part of how do I create a workaround that isn't going to the toolstrip ribbon to click the button, cause as everyone else who has posted here agrees that isn't the right answer. I then was annoyed enough that I created my own context menu and made a keyboard shortcut for it. Still not the right answer as my post explains, but it is a workaround for now for those that are interested:
https://www.mathworks.com/matlabcentral/answers/1875002-simulink-keyboard-shortcut-for-match-block-size#answer_1124482