A wrapper for scatter(.) that

The goal is for this to be a one-stop function to easily create a useful and visually appealing scatter diagram.

Requires the cbrewer file exchange function to be on the path, see https://www.mathworks.com/matlabcentral/fileexchange/34087-cbrewer-colorbrewer-schemes-for-matlab. The file is included here for convenience; copyright remains with the original author.

The following are two examples comparing the default outputs of scatter(.) and scatter_nice(.). In the first example, the linear colormap used by scatter is completely useless due to a skewed distribution of data points. scatter_nice fixes this by using an automatically balanced nonlinear colormap. Moreover, outliers near the beginning of the input vector are completely invisible in the first plot since they are hidden by later datapoints. Using scatter_nice, they are easily visible because of a) the nonlinear colormap and b) randomized-order plotting.

In the second example, simply plotting two groups after another (with hold on) using scatter, the second group will completely hide the first. scatter_nice offers a simple interface for plotting multiple groups and plots them in randomized order.

In both examples, scatter_nice adaptively chooses a point size that is (to my eyes, at least) better suited to the number of datapoints, and selects a fitting and well-crafted colormap from cbrewer. 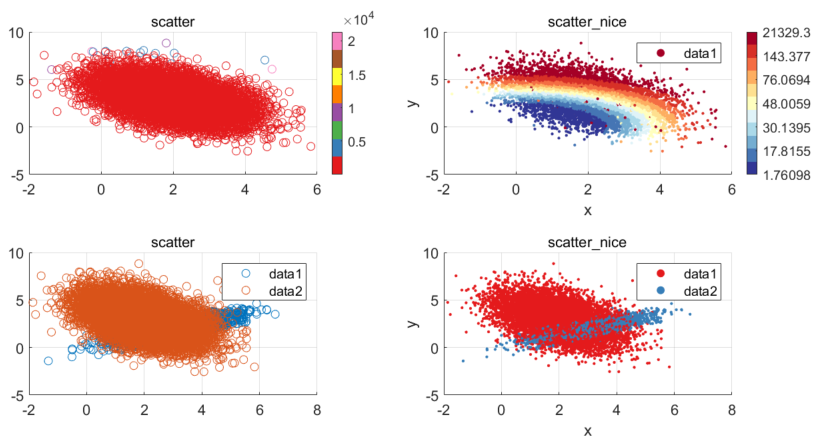 This script has been developed while I was at the University of Lübeck, with the Institute for Electrical Engineering in Medicine.

Created with R2019b
Compatible with any release