From Simulink to C-Code and back to Simulink

Juan Lopez on 5 Mar 2021
⋮
Answered: Mark McBroom on 6 Mar 2021
Accepted Answer: Mark McBroom
I am trying to generate a C code for a controller in a Simulink Model, that I want to replace in the original Simulink model for the C code in order to test it.
This are the steps I followed:
C code creation:
C Code insertion in Simulink.
So my question is what I am doing wrong? I guess it should be in step 4 of the second part, where I only insert the "control_Step.c".
How can I insert in the C caller something that runs all that I created with simulink coder?
Included are some pictures of the model with the C caller already implemented and also the simulink model of what is included in the control.
NOTE: I also tried code generation with Embedded Coder App using ert.tlc but the problem that appears is that the code generation uses some types definitions that generate error: byte_T, creal32_T and creal64_T. I found out that these are "Reserved Keywords for Code Generation" and even though I tried copying this keywords in the identifiers section in code generation settings, the code still appears with this words and keep throwing the error. 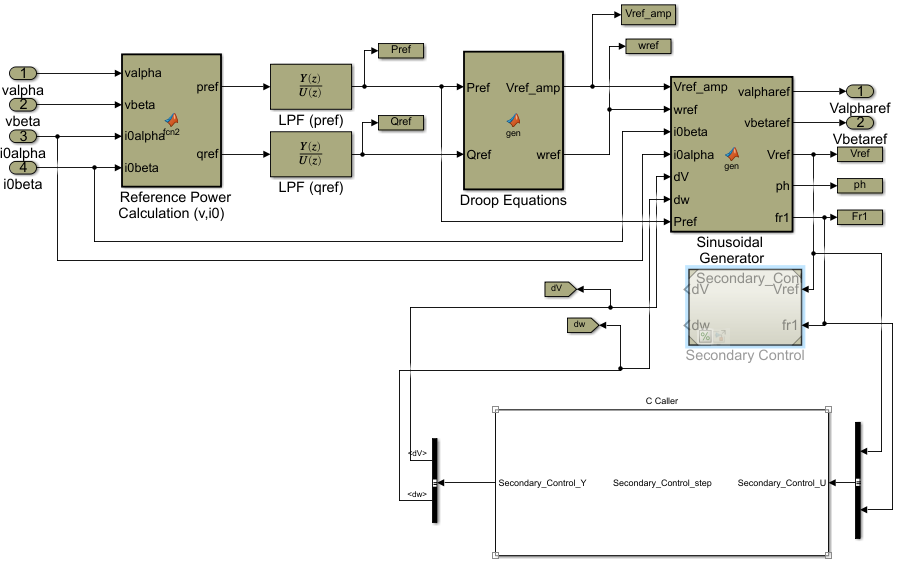 Mark McBroom on 6 Mar 2021
⋮
"SIL" mode addresses this use case and eliminates all of the uncessary steps you are trying to follow. SIL mode allows you to replace a top model or referenced model with the generated code and then run your simulation using the generated code.
https://www.mathworks.com/help/ecoder/ug/configuring-a-sil-or-pil-simulation.html