Can I process 'fit' with a GPU?

Joss Knight on 8 Dec 2018
⋮
No, there isn't, but other options may be adaptable to your problem.
https://uk.mathworks.com/matlabcentral/answers/431697-make-curve-fitting-faster

⋮
Will this become a feature in future iterations of MATLAB?

Joss Knight on 9 Dec 2018
⋮
We plan to accelerate the rate at which we provide improved coverage for gpuArray support in MATLAB Toolboxes, including Stats and Optim. Since these features are customer requested, they will be higher priority.

⋮
Ok, so getting around fit, how would I use polyfit in this case to produce a similar result. I've tried performing a log of both matrices and using polyfit(X,Y,1), but it didn't seem to work.

⋮
Well that's too bad. Can you show what error you got?

⋮
I get no error, just none of the numbers correlate between the output of fit and the output of polyfit. I understand that there might be some variance, but it's not even close.

⋮
They are different algorithms. I wouldn't like to hazard a guess at what's going on with random input data, since there is no good linear fit to random data.

⋮
A lot of the time, but not necessarily in this case, when you see a fit with a range of potential values that crosses 0, such as (-0.003049, 0.002115), then what it can mean is that the results are effectively nonsense, that it was not able to decide between alternate solutions within error bounds.
You are only fitting one exponential in this case. If you were fitting the sum of two or more exponentials or (even more so) two or more guassians, then that kind of situation would probably show up. In such cases, it is common for the algorithm to pick one of the terms as being the "right" term and to try to fit it exactly while treating the other terms as effectively noise, but which of the terms gets lucky depends upon the initial condition (which is often random). The algorithm does not deliberately do this: it is just how the math works out if you do not happen to start with initial conditions in the Goldilocks Zone.
In cases that involve coefficients to an even power, then unless bounds conditions are put in place, fitting cannot tell the difference between the negative and the positive value for the coefficient; in such cases you would see an output in which negative and positive bounds are close to equal but opposite in sign (but often not exactly equal.)
Seeing outputs with confidence bounds that cross 0 should be a warning flag to check the results more carefully.

⋮
It's pretty embarrassing that essentially none of the fitting functions in matlab (for doing regression, generalized linear models, gradient descent, etc) support gpuArray inputs. gpuArrays have been part of Matlab for many years and there is no reason these functions couldn't support this input. It took me literally fifteen minutes to make glmfit support gpuArray input and it speeds up fitting by a factor of 5. The core computation for fitting linear models is a QR decomposition which is ALREADY supported to gpuArrays. SMH.

Fernando Liozzi on 24 Sep 2022
⋮
Hi, please add GPU support for train net, is toooooo slow, I prefer to use Keras in Python for this analysis, but I need Simulink and Matlab codder for put the trained neural network in a STM32 or ESP32, etc.

Fernando Liozzi on 24 Sep 2022
⋮
I have noticed that with one of the methods, it is very fast and it is using something from the GPU called "COPY", what is it? Tensorflow uses the 3D part. The percentage of GPU usage is always greater than 20%, but I have even seen it go up to 45%. For now, excellent. 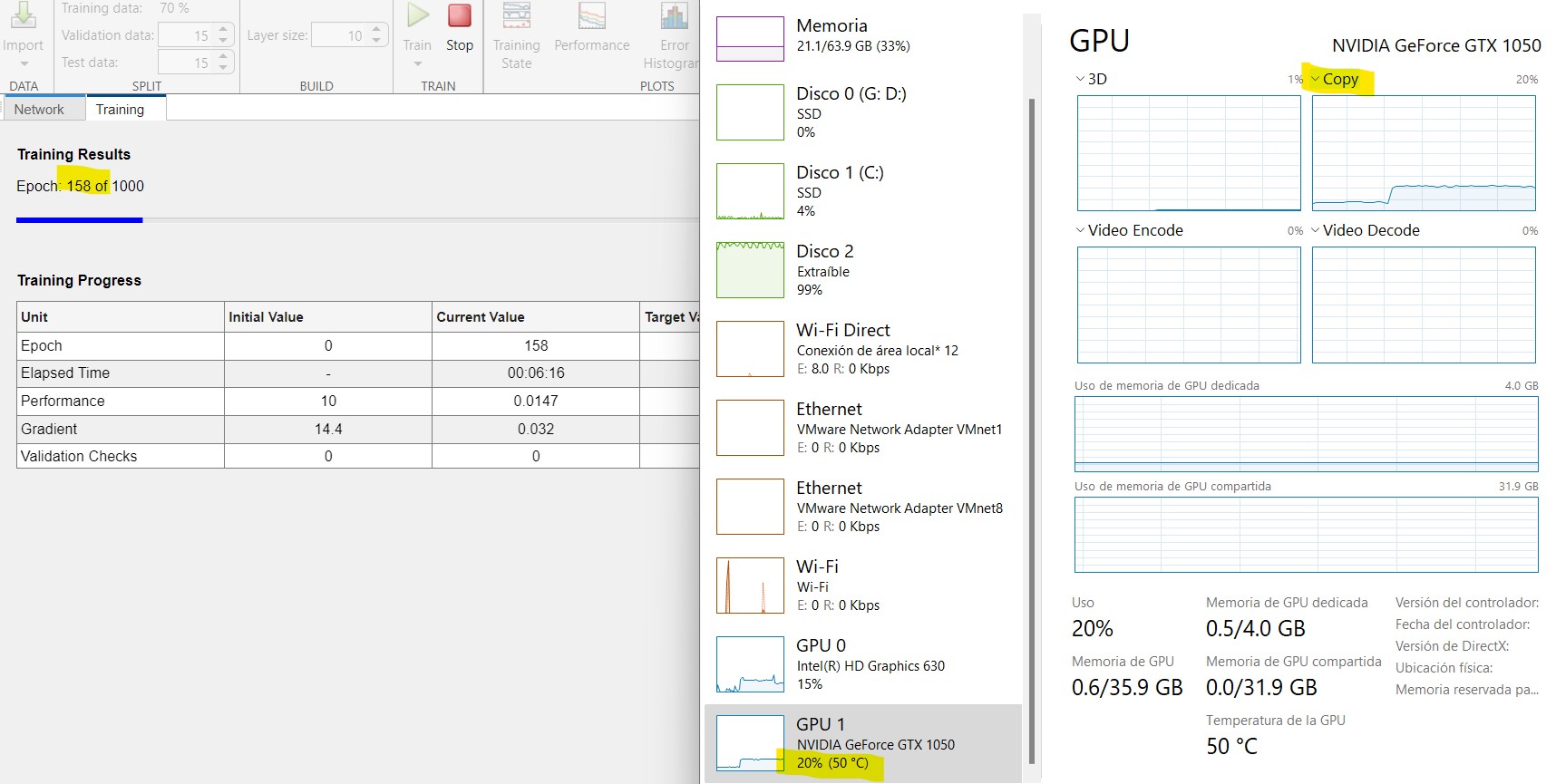