John D'Errico on 28 Sep 2021
⋮
Edited: John D'Errico on 28 Sep 2021
Ran in:
Good. You made an effort, did some reading. Not only that, but you are trying things, getting your hands dirty. Keep that up and you will learn quickly.
First, what does the @(x) syntax mean? This allows you to create a function on the fly, so to speak. A one line thing that is a function of the variable x. You can now evaluate this function directly, but you can also pass it around. You can even create a function handle inside the call to another function, in the same line of code. (That is often called an anonymous function handle.) Function handles are efficient to evaluate. You can pass a function handle into an optimzer like fzero, or into a tool like fplot, or into your own functions.
funktion = @(x) sin(1+x);
It is called a function handle. We can use it like this:
format long g
funktion(3)
ans =
-0.756802495307928
Indeed, MATLAB evaluates the function specified. We can pass it around. For example, pass it to fplot. Here, I will plot the function between limoits on x of 0 and 5. I'll plot the curve in blue, then add a reference line in red at y == 0. Finally, I add grid lines on the pot to help see where it is crossing zero. Finally, since we all know it must cross zero at pi-1, I'll put a verticle green line there.
fplot(funktion,[0 5],'b')
yline(0,'r')
xline(pi-1,'g')
grid on 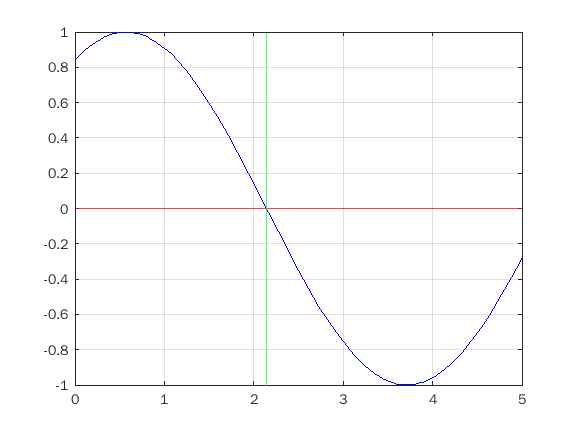 So when I passed a symbolic variable X into funktion, it returns sin(X+1) in a now symbolic form.
Xsol = solve(funktion(X),X,'returnconditions',true)
Xsol = struct with fields:
X: pi*k - 1 parameters: k conditions: in(k, 'integer')
So the global set of solutions is pi*k-1, where k is any integer.
As far as what you did, and why it failed, this I cannot guess. because what you say you did was correct. If I was forced to guess, you actually had some other function handle stuffed into the function handle funktion. This probably happened when you were playing around. So when you see something strange, check what is in the variables you have created. You may sometimes be surprised. 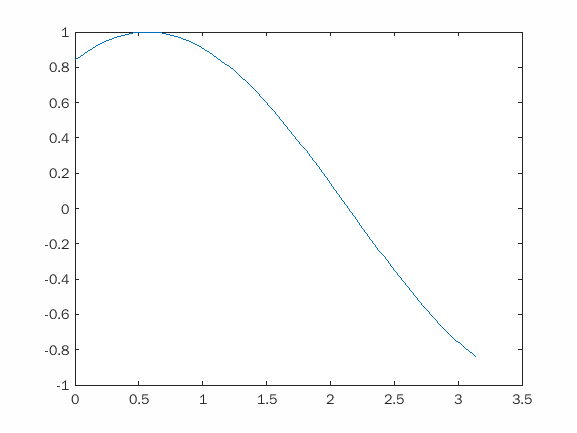