"When we need to customize motor configurations to optimize performance, we simulate the whole system in Simulink, and the development phase gets much faster." 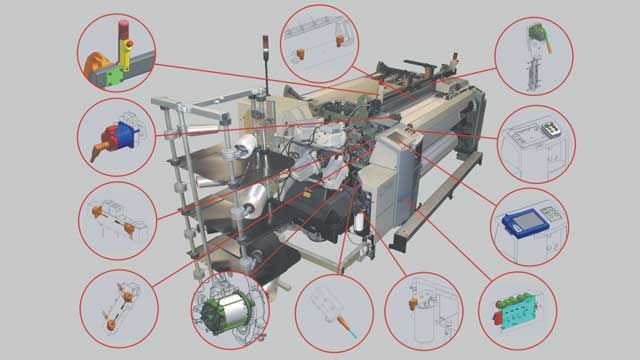 “SRM motors are mechanically very simple, but they require complex control,” explains Nico Verhelst, systems engineer for Protronic. “Together, Simulink and FLUX enabled us to meet our requirements of simulating the motor control strategy and obtaining an accurate torque waveform, in combination with the simulation of the load.”

A key technical challenge was to integrate the motor’s electromagnetic properties into the overall design of a dynamic application. To obtain the desired results, Protronic needed a way to simulate the controls and mechanical loads with the electromagnetic effects of the SRM.

Protronic also needed to validate and optimize their designs without building expensive prototypes. With the customer waiting for results, they needed to complete the total design within weeks, while a normal integrated design of this extent would easily take months.

Protronic met their deadline by using Simulink and FLUX to model, simulate, and optimize the weaving machine and SRM designs.

“We wanted to combine the torque calculated by FLUX with the speed, ease of use, and open control interface of Simulink,” notes Verhelst. “This combination of tools provided an ideal simulation environment.”

Engineers modeled the dynamics of the load in Simulink using analytical formulas for variable inertia and damping. They modeled the control strategy for the motor with Simulink and incorporated the electromagnetic model of the SRM with FLUX-to-Simulink technology. They optimized system performance by simulating custom motor configurations.

Simulink also enabled engineers to optimize system performance as well as the position, speed, and torque controllers, by iteratively adjusting the motor configuration and then re-running the simulation to validate performance.

Faes notes, “We use Simulink to analyze the effect of our motor performance on different parts of the application. For example, if we are concerned about the exchange of energy between axes, we can easily examine that using scopes in Simulink.”

Combining its technical expertise with Simulink and FLUX, Protronic has become the European leader in applying SRM technology in industrial machines and has built an installed base of more than 150,000 units in the last decade. Protronic plans to continue to use MathWorks tools and FLUX on a wide range of customer applications.