Use MathWorks tools to trace requirements to design specifications, model and simulate the ECAS, and automatically generate production code

"With MathWorks tools for Model-Based Design, we have one integrated tool chain from the beginning of development to the end. We have clear traceability of requirements, and our software is more maintainable because it is implemented as a model from which we automatically generate code." 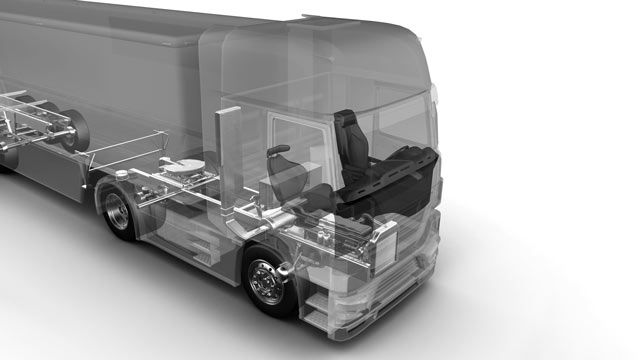 The air suspension in a large truck performs two important duties: It lifts and drops the chassis to couple the trailer, and it helps stabilize vehicles that have a high center of gravity. When a leading truck manufacturer asked Continental to develop an electronically controlled air suspension (ECAS) for its next generation of heavy-duty trucks, it presented the Continental engineers with a set of 1360 stringent system requirements. In addition, the ECAS had to ensure the safety and comfort of drivers operating 40-ton vehicles.

Continental engineers used MathWorks tools for Model-Based Design to create a model of the ECAS and link it to the customer requirements, maintain an executable specification of the ECAS, run closed-loop simulations, develop a real-time prototype, and automatically generate production code for a 16-bit microcontroller.

“We now have one common tool chain from the beginning of the development process to the end,” notes Thomas Ehl, senior manager of software development for commercial vehicle control units at Continental. “We have clear traceability between the requirements and the model. From that model, we generate code for rapid prototyping and production targets, enabling us to test the design very early in the process.”

In the past, Continental tracked customer requirements using manual processes that were both tedious and error-prone. Requirements were maintained in a text file and were not directly linked to the detailed design or to the C code, making it difficult to show a customer why a requirement may need to be changed or defined in more detail. Demonstrating that a design met all requirements was also a challenge.

Writing code was a time-consuming process: Continental engineers handwrote C code and then had to find and eliminate coding errors. To shorten the development cycle and identify potential problems as early in development as possible, they needed to automate these processes.

Using MATLAB®, Simulink®, and Stateflow®, the team developed a model of the ECAS that generated output signals to control air spring and damper valves based on several input parameters, including axle level, air spring pressure, truck speed and acceleration, and engine torque.

With Requirements Toolbox™ they traced customer requirements in IBM® Rational® DOORS® to Continental’s performance specification and the relevant components of the ECAS model.

The team then ran open-loop simulations in Simulink by applying stimuli to the inputs and comparing the model outputs with expected results from the performance specification.

To conduct closed-loop tests, they developed a plant model of the truck in Simulink and ran simulations of the controller and plant model together.

The group automatically generated C code for the controller model using Simulink Coder™. They deployed this code to Simulink Real-Time™ to create a real-time prototype of the controller for road tests in a real truck.

Using Fixed-Point Designer™, they converted the floating-point design to an initial fixed-point design and redeployed it to Simulink Real-Time. The fixed-point code met performance requirements from the first iteration.

After verifying real-time operation on the prototype, Continental used Embedded Coder® to automatically generate code for the production target processor. The code was compiled with a Cosmic Software compiler for a Freescale™ S12XE processor running the Micrium µC/OS-II real-time operating system.

The team verified that the code met the MISRA® standards required by the customer, and then conducted final road tests to fine-tune the hardware.

The ECAS has been demonstrated to the customer and is slated for production. All new controller designs at Continental will be developed using Model-Based Design.