Use Simulink to model and simulate candidate algorithms, and use Simulink Coder with Simulink Real-Time to conduct real-time tests of the most promising candidates

“MATLAB, Simulink, and Simulink Real-Time provide a robust, flexible, and efficient means of integrating the many different technologies that cochlear implants require. We identify the best ideas faster, and our recipients experience the improvements in real-time tests, which are essential to our research.” 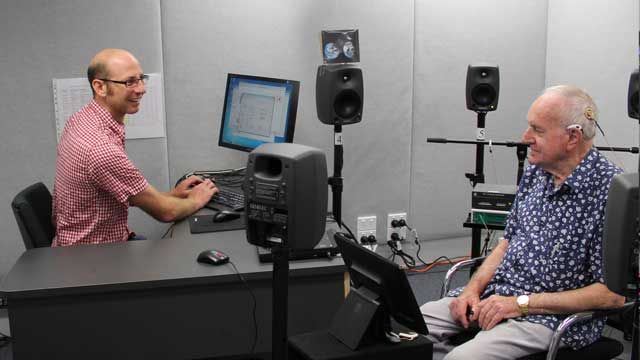 As the global leader in implantable hearing solutions, Cochlear Limited is dedicated to connecting hearing-impaired individuals with the world of sound. There are more than 185,000 Cochlear™ Nucleus® Implant systems registered globally.

The company’s noise reduction algorithms for cochlear implants enhance the ability of the listener to perceive speech in challenging acoustic environments. Cochlear has achieved significant gains in the clinical performance of these algorithms using real-time testing on a rapid prototyping platform developed with MATLAB® and Simulink®.

“With Simulink, engineers and scientists can clearly visualize the integration and operation of new algorithms within the existing commercial signal path,” says Dr. John Heasman, principal engineer at Cochlear. “Our engineers prototype algorithms using Simulink models that are clinically applied using real-time tests with cochlear implant recipients. The ability to create real-time models of algorithms using Simulink Coder and Simulink Real-Time is vital to the success of our research and clinical outcomes.”

Cochlear evaluates algorithms developed by external researchers and internal engineering teams. “There is no shortage of great ideas in the field of signal processing for cochlear implants,” says Heasman. “The real challenge is identifying those algorithms that offer the most promise for our cochlear implant population. To do this, we first analyze each algorithm empirically on the bench and develop those offering the most clinical potential.”

Engineers used MATLAB and Simulink to model the signal processing path of the company’s commercial products. This baseline model was then used both as a framework and clinical benchmark for the implementation of new algorithms.

Engineers model new ideas in Simulink using fast Fourier transform (FFT), inverse FFT, and other blocks from DSP System Toolbox™ and the Simulink library. The workflow also supports the translation of algorithms, written in MATLAB and other languages by research collaborators, into Simulink models.

During simulations, the models are subjected to predefined acoustic test inputs, for which the engineers have already produced a set of desired outputs. The team uses MATLAB to analyze the simulation results and compare them with the desired outputs.

After identifying a promising algorithm, the engineers generate C code from the Simulink model using Simulink Coder. The code is compiled and deployed to a Speedgoat turnkey real-time system with Simulink Real-Time.

In clinical validations, the Simulink Real-Time system is linked via custom hardware to a recipient’s implant, enabling the clinician to measure the clinical performance of the algorithm using simulated real-life acoustic environments, including live speech in quiet and competing noise.

A GUI built in MATLAB enables the clinician or engineer to load clinical settings, select algorithms, and adjust parameters in real time. The recipient has access to a similar interface to rate the performance of each system variation for criteria such as speech clarity and ease of listening.