To evaluate designs and technologies for hybrid and fuel cell vehicles

"We developed an advanced vehicle framework and scalable powertrain components in Simulink, designed controllers with Stateflow, automated the assembly of models with MATLAB scripts, and then distributed the complex simulation runs on a computing cluster—all within a single environment." 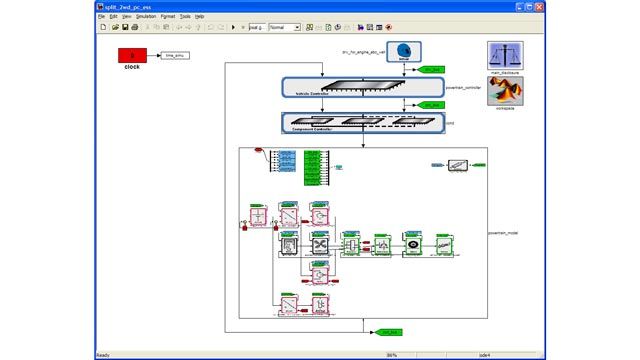 In response to this need, Argonne National Laboratory (Argonne) collaborated with leading auto-makers to develop the Powertrain System Analysis Toolkit © (PSAT), an automotive engineering tool that evaluates a vehicle's fuel economy and performance by simulating its transient behavior and control system characteristics. The U.S. Department of Energy (DOE) Vehicle Technologies Program funded the development of PSAT and uses PSAT as its primary vehicle simulation tool for all FreedomCAR and 21st Century Truck Partnership activities.

Using Simulink® and other MathWorks products, Argonne researchers not only developed PSAT; they also distributed the many complex simulations needed to evaluate vehicle performance in a multiprocessor environment. Distributing the hundreds of simulations required for each vehicle enabled them to get results much more quickly.

DOE studies frequently include up to 800 vehicles that employ a wide range of technologies. Evaluating just one vehicle involves a complex set of variables, technologies, and performance metrics, including driving cycle, fuel economy, and range (for plug-in vehicles).

The group also needed to automate the many complex simulations required for each study.

"We developed an advanced vehicle framework and scalable powertrain components in Simulink, designed controllers with Stateflow®, automated the assembly of models with MATLAB® scripts, and then distributed the complex simulation runs on a computing cluster," says Pagerit.

Working in Simulink, Pagerit and his colleagues created a vehicle framework based on bond-graph, which captured the energy flows around the system. They then developed models for a wide range of powertrain components, including the fuel cell, engine, electric machine, and battery.

Using Stateflow, the team developed control systems to optimize fuel efficiency and balance power use in hybrid vehicles from the combustion engine and electric motor.

Argonne engineers developed algorithms in MATLAB® that generated Simulink models from the framework and powertrain components, automating the creation of vehicle models based on each study’s requirements. For example, for a DOE study Argonne used the MATLAB scripts to generate models for 780 vehicle configurations and to automatically scale battery size, engine power, and other powertrain component parameters.

Argonne plans to expand the cluster to 32 worker nodes to handle the increasing number of studies with even larger data sets requested by the DOE.