Building a Microscope That Sees with Helium

Sometimes, the “light” we need to look at something can damage it. That’s the inspiration for a new class of microscope being developed at the University of Cambridge and the University of Newcastle, in Australia.

Scientists already have a plethora of imaging methods. Optical microscopes, which focus light through lenses, can resolve features down to about 0.3 micrometers. Scanning electron microscopes use an electron beam to reach a resolution of about 1 nanometer or better. The highest-resolution microscopes are scanning tunneling microscopes, in which a sharp tip passes just above the surface of a sample and electrons use quantum mechanics to “tunnel” from the tip to the sample, generating current and a computer image. These microscopes can see individual atoms, a fraction of a nanometer across.

Unlike existing imaging methods, the new scanning helium microscope will not bombard samples with energy or interact with them electrically or chemically. 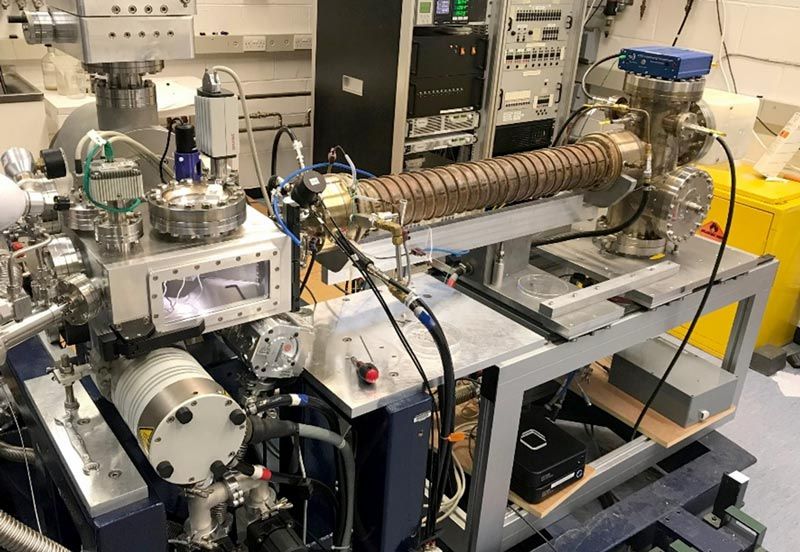 But all of these methods have drawbacks—most important, light and electrons can damage a sample. Certain materials, such as ice and wax, can melt. Biological samples, such as skin specimens, can suffer structural damage. Electrons pummel bacteria biofilms and also organic electronics like photovoltaics and transistors.

That’s why the labs of Andrew Jardine, a professor of experimental physics at Cambridge, and Paul Dastoor, a professor of physics at Newcastle, are developing a scanning helium microscope, or SHeM. Along with their colleagues from the two universities and several international collaborators, including those from Professor Bodil Holst’s group in Bergin, Norway, they have invented a new microscope that takes images using neutral helium atoms instead of light or electrons.

Electron microscopes also require insulating samples with a conductive layer such as gold, which can obscure the material underneath. The photons used in light microscopes can penetrate beneath the surface of a sample before reflecting, clouding the image of the surface structure. Helium avoids these challenges. The teams have already used the SHeM to image sensitive biological samples like bio-films and insulators such as PPE fabric.

Helium atoms carry much less energy than photons or electrons. They are also electrically neutral and chemically inert, so in addition to not battering samples with energy, they won’t interact with them electrically or chemically.

This new microscope is making use of a very old technology: the pinhole. More than 2,000 years ago, scholars including Aristotle understood what’s called the camera obscura, in which tiny holes act as focusing devices. Researchers are now using “pinholes” much smaller than tips of pins to narrow rays of atoms, creating images of objects much too small to see with the naked eye.

As well as using pinholes, the Cambridge lab has applied broad beams of neutral helium to study the fundamental structure of and dynamics on surfaces for many years. They aim a wide beam of helium atoms, a few millimeters across, at a sample. The angular distribution and speed changes of the scattered atoms enable them to decipher the positions and movement of the surface atoms. But for decades, people had hoped to directly image fine surface structures with helium atoms, including a major European project.

The team’s home-built detector counts one in a hundred entering helium atoms instead of the one in a million possible with commercial devices. 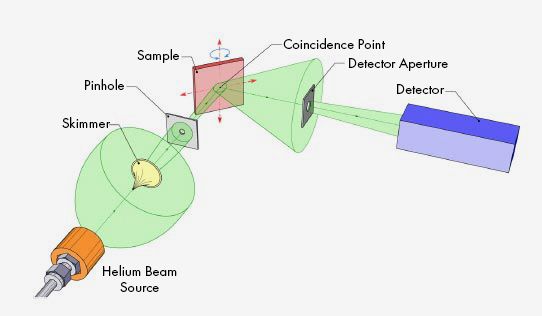 The helium beam passes through a skimmer and pinhole to hit the sample being studied. (Image adapted from Taxonomy through the lens of neutral helium microscopy, Myles, T.A., Eder, S.D., Barr, M.G. et al. Licensed under CC BY 4.0.)

According to quantum mechanics, matter behaves as a wave just like light does, and helium atoms have a shorter wavelength than optical photons do, so helium microscopes have a better theoretical resolution. “Everybody wanted to go straight for the full potential of the technique,” says Sam Lambrick, a Ph.D. student in Jardine’s lab. “People were trying to build a complicated machine that gets you there immediately.” The problem is that you can’t focus helium beams using optical lenses, because the atoms won’t pass through, and you can’t focus them using electric or magnetic fields, because the atoms aren’t charged.

One option involves building an atom mirror, a curved mirror that precisely deflects atoms. But building one with sufficient smoothness on the atomic scale has turned out to be phenomenally hard. “It’s just ridiculously difficult to make it work.” So, Jardine’s lab took an easier route. “In the end, we switched to this pinhole approach. We made that work.”

The microscope starts with a high-pressure cylinder of helium attached to a nozzle. Atoms expand supersonically into a vacuum, where they approach a skimmer, a cone with a small hole. Only helium traveling in a straight beam from the nozzle makes it through the skimmer. The beam then passes through a pinhole a fraction of a micrometer across. After the pinhole, the atoms hit the sample, attached to a movable platform, at a 45-degree angle.

When the helium atoms hit the sample, they are repelled by electrons in the surface and scatter in a range of directions. Atoms that leave in a particular range of directions are collected and counted in the detector, which is used to give the brightness of an individual pixel. The sample is then moved, to scan the atom beam over the surface, which builds up the image pixel by pixel.

One of the trickiest bits of equipment to construct, Jardine says, was the detector. They needed a type of mass spectrometer. A mass spectrometer separates particles according to their mass, typically by bending their paths in a magnetic field and directing those with a certain mass, 4 atomic mass units in the case of helium, to hit the counter.

But commercial devices would detect only one in a million helium atoms. The first stage in a mass spectrometer is to ionize the atoms, by “knocking off” an electron using another, fast-moving, electron. However, helium is very difficult to ionize. The Cambridge detector is specially made for helium, so it removes the electrons much more efficiently. This device detects one in a hundred entering helium atoms instead of one in a million. “It’s home-built,” Jardine says, “so it’s a little bit temperamental, but we are working on a new and much more stable version at the moment.”

To control their custom kit, the Cambridge team wrote custom code in MATLAB®. “Some of the equipment that we use has provided drivers that work well with MATLAB,” Lambrick says. The code tells the microscope to move the stage 5 micrometers to the left, or to record the stage position, or record the detector signal. The MATLAB language also provides lots of flexibility.

“When you’re doing research, you don’t want to be restricted to the way that somebody else has designed a program to run the machine.”

“When you’re doing research,” Jardine says, “you don’t want to be restricted to the way that somebody else has designed a program to run the machine.” He says their software customization is a unique research approach. “It’s a different way of doing it. You don’t get stuck in this loop where somebody 10 years ago thought you’d want to do only these experiments, and therefore you can do only these experiments.” The flexibility allows them to, say, combine multiple measurements, or use the same software environment for both debugging and normal operations. 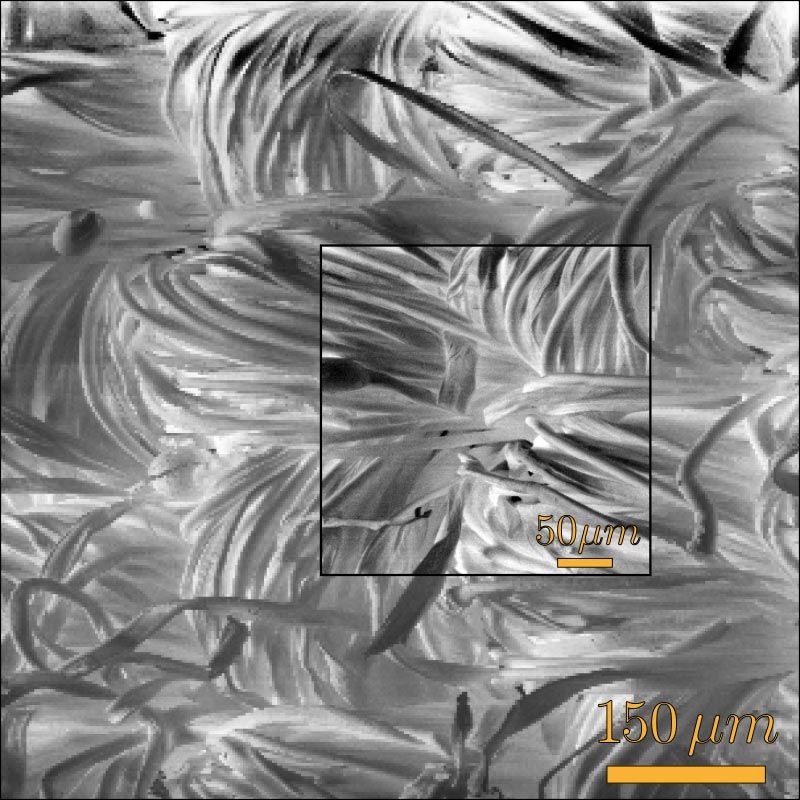 The flexibility also allows them to build up layers of commands into longer scripts: perform a series of actions for one pixel, then move the platform and perform those actions on the next pixel. Lambrick uses the App Designer in MATLAB to make the most popular scripts accessible to anyone in the lab through a user interface. He can create a window, then drag buttons and boxes into place and connect them to scripts.

The team also uses MATLAB to simulate the machine and better understand its design and operation. Lambrick created a ray-tracing framework, allowing them to send virtual atoms through the virtual microscope, then change the microscope or the sample and rerun the simulation. For computationally heavy aspects, he can write code in C and use MEX functions in MATLAB to call upon those bits of C code.

Ray-tracing has helped them interpret what they see with the real microscope. “Many structures can be really complicated and can have deep pores into them,” Lambrick says. “We wanted to understand better how these deep features will affect the contrast.”

In one experiment, they looked at a series of precisely machined trenches in a sample. As the trenches grew deeper, they fell into “shadows” and looked darker—until they were deeper than they were wide and became light again. After that point, they all looked the same shade of light grey.

“When we first looked at the image, it didn’t really make sense,” Lambrick says. Then they ran a ray-tracing model. They found that in the deep trenches, helium atoms bounced around a lot, and eventually many of them escaped toward the detector, creating brightness. The team could then look at porous scaffolds that biomedical researchers use to grow tissue samples and know what they were looking at. What appeared to be bright spots were actually deep holes.

The team also uses simulations to improve the microscope’s design. They can draw parts in a CAD program, import the files into MATLAB, and test them. If all works as planned, they’ll send the files to the workshop. Otherwise, they’ll refine and repeat.

One upgrade they’re currently exploring is the replacement of the pinhole with what’s called a zone plate. Instead of a single hole, it’s a series of concentric circular slits forming a bullseye pattern. The slits slightly diffract the atoms so they approach a focal point, which the researchers target right on the sample. Zone plates could improve resolution from 1 micrometer to maybe 10 nanometers, a 100-fold improvement. The team is also building a version of the SHeM with four detectors instead of one, enabling 3D imaging. 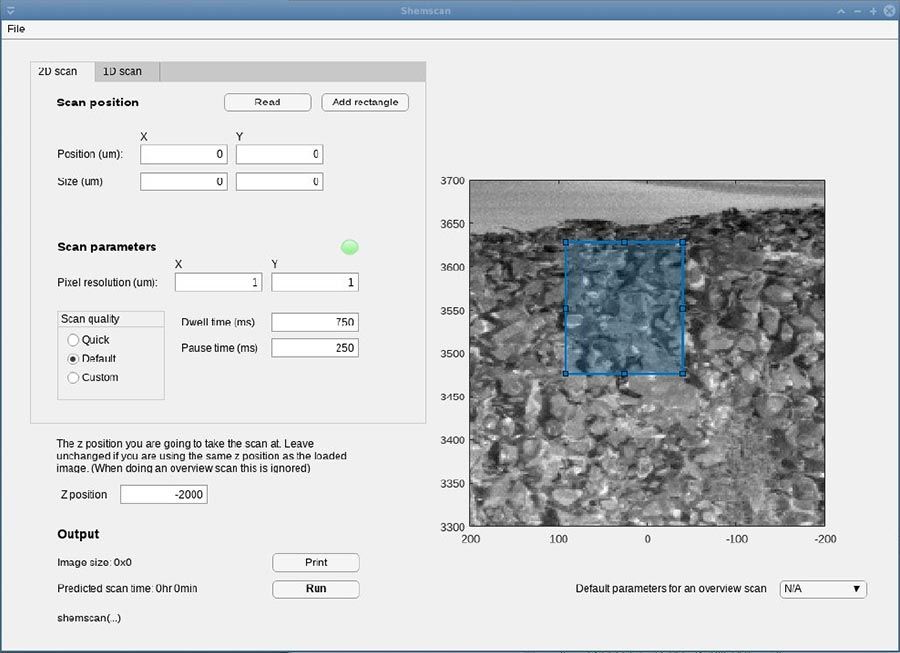 So far, they’ve completed three microscopes (two are in their lab and one is with their Newcastle collaborators). Labs in Bergin, Norway; Hyderabad, India; and Portland, Oregon have built similar machines. Jardine hopes to commercialize the device for wider use. Some researchers are already making discoveries with them. The Newcastle team looked at tiny structures on the surfaces of leaves and shark skin to inform taxonomies.

Jardine says more findings will come, but they still have much to learn about the tool they’re building. “There’s lots of interesting science and engineering that you can do with this.”

When You Know the Answer, Deep Learning Can Determine the Question

Decoding Butterfly Flight with High-Speed Cameras and a Wind Tunnel