In an assignment A(I) = B, the number of elements in B and I must be the same

⋮
Maybe input vector t has more elements. It needs to be only one as remaining variables just have one variable. 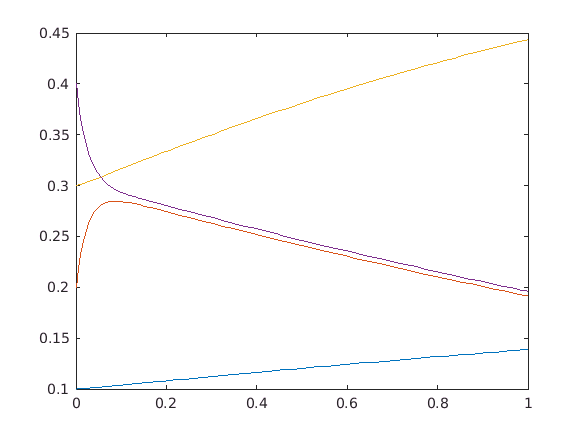 ⋮
means I have to determine what is the t value of f_glukosa?

⋮
my code use ode45 for run this code

⋮
t(:) takes whatever values are in t and makes a column vector out of them. The .' after that transposes the column vector into a row vector. t(:).' is a short way of writing reshape(t, 1,[])
The reason why I coded that is that if t is not a scalar then it takes too much explanation and self discipline to force it to be either a row vector or a column vector specifically. If I had coded assuming it was a column vector you might have replied that it was a row vector or 2d array and I would have had to adjust the code to handle whatever you turned out to be passing in. It saved rounds of back and forth with you and future readers for me to code it the first time in a way that did not depend on what exactly the input shape is.
I already demonstrated above that your original function works without change with ode45. The only change I made was to add a final "end" to your code, which is required if you use the function in a script the way I did here, but would not be necessary if you had stored the code in its own fix_reaksi_tumor_glioma.m file.
The changes I made later with the t(:) and so on are only needed if you are invoking the function in your own custom code, such as if it had turned out that you are building your own RK45 or Euler integration function.
https://www.mathworks.com/matlabcentral/answers/725272-in-an-assignment-a-i-b-the-number-of-elements-in-b-and-i-must-be-the-same#comment_1281702