How to concatenate/combine a list of images in one mat.file (convert picture 1 into picture 2)

⋮
Edited: DGM on 8 Aug 2022
I don't understand where this is going. You ask to put a bunch of images in a .mat file (which is plausible, but the presentation and expected output matters).
Picture 1 is a struct with some images in it: 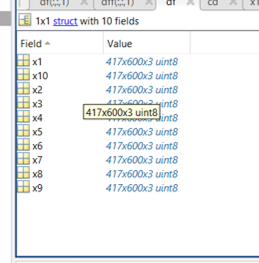 You want to convert a struct full of images into this:

which is just a 3-D numeric array of unknown size. I don't know if it's an image or an array of indices or something else. How this relates to which fields from the struct should be included in the .mat file is unclear.
The code given does not involve either the struct or said array. It loops through the pages of a different array and displays them. No attempt is made to address the struct or save anything to a .mat file. If this example is to be taken as a description of intent, then it's unclear how the struct is involved.
If #1 or #3, if you know what variables you want to save, check the documentation for save.
If #2, what is the context? Are the images actually color images? Is the output expected to be a MxNxP volumetric image, or a MxNx3xF multiframe image? If the images are color and the output is to be a MxNxP volumetric image, is there a context-relevant preference for the manner in which color information is removed?
If #4, consider this advice.

⋮
Edited: BA on 8 Aug 2022
wow, thank you for this explanation. Picture 2 (someone's file) is a list of images so when I do 'imshow(dff(:,:,1))' it returns the first image but when I tried to do similar to my list of images it gives me an error. I think I need a way to make the images as 417x600x30, so the issues how to stack the 10 pages together as an array.
Yes, I am after number 2, the images are ultrasound (black and white) see attached as an example.

Walter Roberson on 8 Aug 2022
⋮
What you are asking for is possible but not recommended. You are asking to open the variable browser on each field of the struct, and have the header be the same as the field name. In order to do that it is necessary to extract the fields from the structure into individual variables that have the same name as the field names, as the command to open the variable browser only supports plain variable names, not field references.
The below code does that extraction, but first it makes sure that doing so would not overwrite any variable of the same name.
The code cannot be put into a function because any variable created would disappear as soon as the function returned. (Unless perhaps something could be done around global variables or persistent variables or base workspace.)
The code should be improved to check for conflicts with the variable names used to manage the loop. Oddly, that part could be put into a function.
F_E_I_L_D_S = fieldnames(df);
K_N_O_W_N = whos();
B_O_T_H_ = F_E_I_L_D_S(ismember(F_E_I_L_D_S, K_N_O_W_N));
if ~isempty(B_O_T_H_)
error('cannot view fields without interfering with existing variables: %s', strjoin(B_O_T_H_, ', ')) ;
end
for I_N_D_X_ = 1 : length(F_E_I_L_D_S)
T_H_I_S_ = F_E_I_L_D_S{I_N_D_X_};
eval( T_H_I_S_ + "= df."+T_H_I_S+";")
openvar(T_H_I_S_)
end
Creating variable names dynamically is seldom a good idea.
Note that the variable browser will allow you to edit the values, but the changes will not be written back to the struct.

⋮
Edited: BA on 8 Aug 2022
Thank you for this. Picture 2 (someone's file) is a list of images so when I do 'imshow(dff(:,:,1))' it returns the first image but when I tried to do similar to my list of images it gives me an error. I think I need a way to make the images as 417x600x30, so the issues how to stack the 10 pages together as an array.
I tried you codes but I have the following error:
Error using cell/ismember (line 34)
Input A of class cell and input B of class struct must be cell arrays of character vectors, unless one is a
character vector.