How many terms of series are required to get accuracy upto three decimal point. That is series sum correct upto 3.141

⋮
Hi ajeet,
For what reason are you sure that an answer of 1000 is wrong? After all, the 1000th term has a size of approximately 2x10^-3, so it is not unreasonable to suppose that it might take a lot of terms to get the result.

⋮
Hi david,thanks for answering.I'm pretty sure that 1000 is wrong because if you sum up this series for 1000 terms then sum will be 3.14059265.So,do you really think it is correct upto 3 decimal points(Obviously not). Also if you sum up this series for 2000 points then the sum will be 3.141092653.Yes,indeed this is correct upto three decimal point.This means for three decimal point accuracy the required terms will be between 1000 and 2000.

⋮
Hi,david,
Surely I'm not talking about rounded value upto 3 decimal digits. The original value of pi starts from 3.14159265.... so I'm calculting the given series and when the series sum starts from 3.141..... then that is my answer.Means minimum no. of terms required to get the value 3.141.......Hope you got my point.That was really challenging for me.Hope you all can help me.

John D'Errico on 20 Oct 2021
⋮
Edited: John D'Errico on 20 Oct 2021
@ajeet sahu - what you do not seem to understand is that the script you have shown IS performing the correct iterations, The problem is with the convergence test. But more importantly, you will need to decide what it means to YOU for the convergence test to terminate. Until YOU state a clear definition of what it means for you to get the convergence you want, then code cannot be written without a clear definition.
I''ve plotted below what the successive approximations do, by looking at a specific digit here: 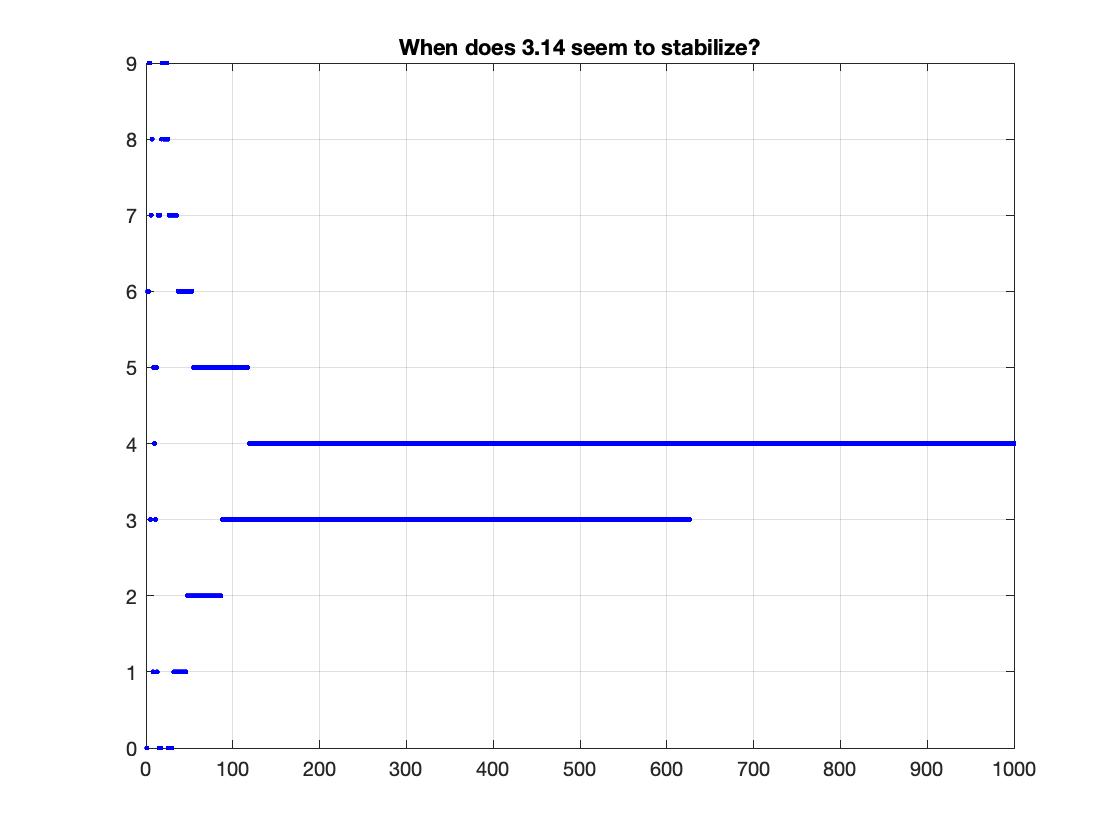 I've plotted that second digit here. As you can see, it seems to be around iteration 625 or so that 4 becomes stable, but it was osillating between 3 and 4 from roughly iteration 120. So the very firsst time a 4 appears after 3.1, is roughly iteration 120.
Now, look at the next digit. When does it stabilize? 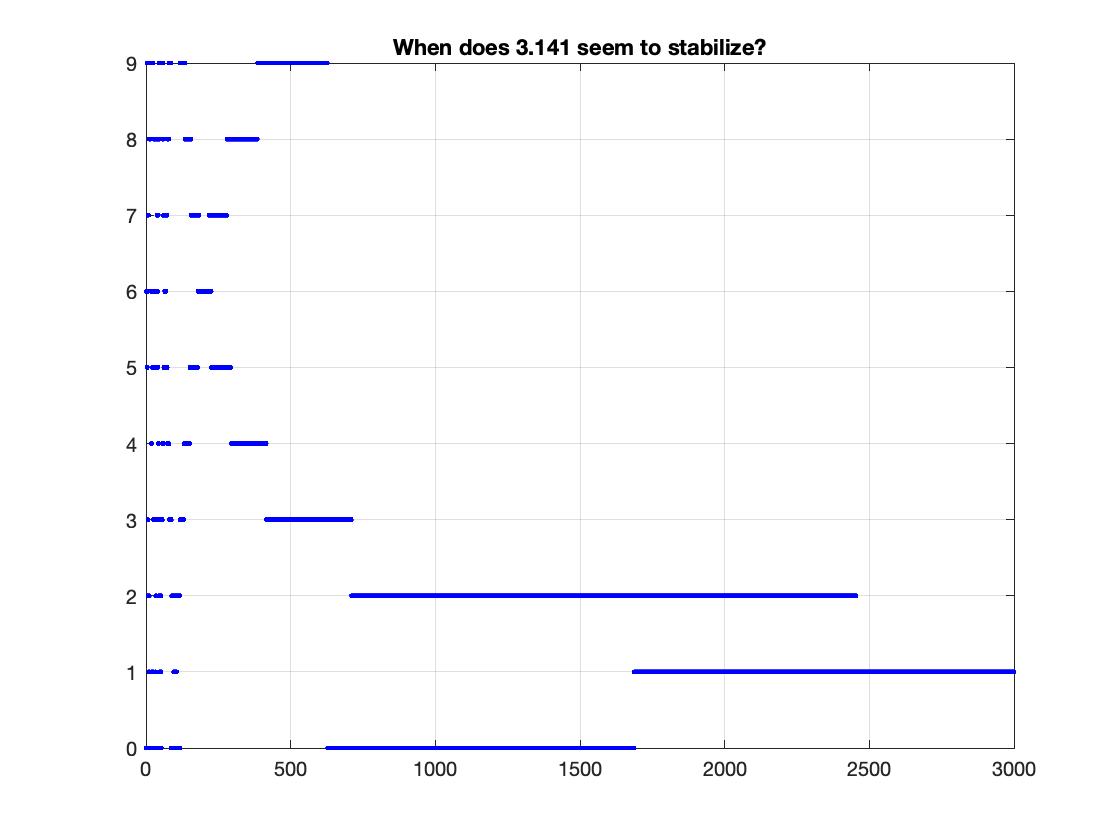 Here we see that a 1 in that place begins to appear around iteration 1700, but that third digit is now oscilating between 1 and 2 for a long time. It is close to iteration 2500 before we get a stable digit 1 at that point. The problem is, if we look at pi itself, 3.142 is actually CLOSER to the true value of pi than is 3.141. So can we say that 3.141 has converged? This is the problem with your tolerance test. Your convergence test is looking to see if the absolute error in the approximation to pi is within a specific tolerance, and stopping as soon as that happens.
I could also plot the next digit, as found by that approximation. etc. But you need to decide what convergence means to you. And probably, you need to decide what it means to your teacher, because that is who will be grading your solution.
So next, consider the absolute error, thus your approximation minus pi. When does that error, which is oscillating in sign at EVERY iteration, become ssufficiently small in absolute value at some point? 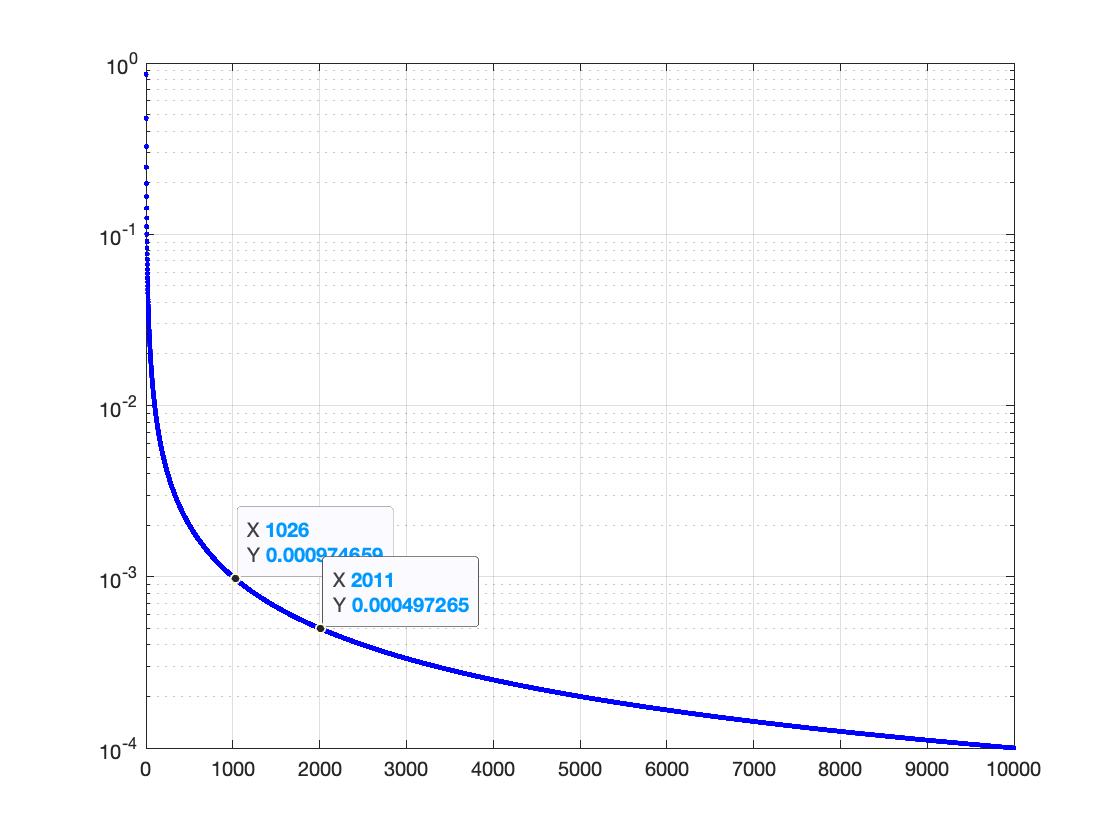 As you can see from this last figure, I had to use a log scale on the y axis, because the numbers become small. But if you are looking only at the difference from ground truth, at what point would you determine the series has finally converged?
We cannot give you a convergence test until you know yourself, and you explain in clear words, what it means for that approximation to have converged. Typically, is is simply absolute convergence that is used, so one might use the absolute difference between truth and the approximation, and when that difference is first less than some tolerance value. But that does NOT gaurantee that a specific digit is correct. As you see from the plots I have shown, any given digit will oscillate for quite a while before it settles into a fixed value.
So your problem is within your own mind, and only there. Until you explain what it means for convergence, and until you explain what you think your teacher means for that to happen, nobody can help you.

⋮
Edited: ajeet sahu on 20 Oct 2021
Thankyou very much John,
Thankyou for explaining everything in detail. You are right that the problem is in my mind and I couldn't tell that to you all. Ok,let me try to explain what I want....
As you've said that the 1 at third decimal place begin to appear at around 1700 iterations.(I needed the exact no. of iterations at which it happen and that is what I wanted).Although on next iteration there will be 2 at that place and then again 1 at that place means it will oscilate(as you demonstrate) upto some no. iteration(around 2500 as you said).This oscillation happening because of nature of the series. I don't know how you plotted these things.I'm still a MATLAB learner.
Can you provide me the script which output the exact no. iteration needed to just begin 1 at third decimal place.Means around 1700(as you said). I've tried many things to do this but I couldn't write the script for that. The script that I shared was the my first try to do that but that fails(because 1 at third decimal place doesn't start from 1000th iteration). Hope I could explain what I wanted

⋮
John, Please help if you can provide script or even logic.I really want to know how we can terminate loop at that point and get exact no. of terms needed to start the 3 at 3rd decimal digit. Also,if you are thinking that I need this for my teacher then you are not correct.I'm a graduate and self learning MATLAB from 4 months.No one is grading my work. I love solving the different type of MATLAB problems but this time I couldn't do that so I came here.

⋮
Code is correct. Hopefully you understand your exercise well