Develop the propulsion control algorithms for the USS Makin Island

Use Model-Based Design with MATLAB and Simulink to model the ship’s main systems, develop and verify control algorithms, and generate code for onboard training and HIL test setups

“We mitigate risk by simulating complex marine and aircraft systems before they are built. To reduce costs, we automate simulations with MATLAB and reuse models throughout development. Understanding multidomain systems through simulations in Simulink and Simscape Electrical is invaluable to our business.” 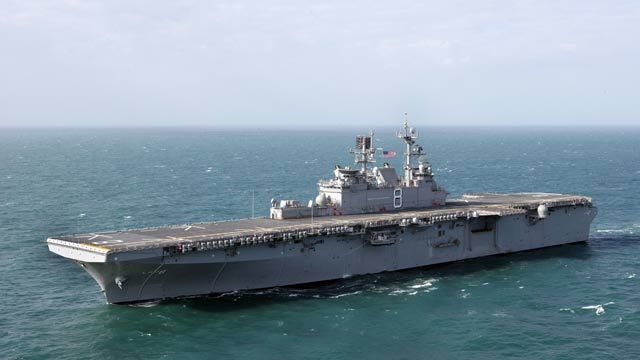 The USS Makin Island (LHD 8) is a twin-shaft amphibious assault ship in active service with the U.S. Navy. Nearly 850 feet long and with a full displacement of over 40,000 tons, the Makin Island can carry and launch dozens of helicopters and landing craft. Unlike earlier steam-powered ships of its class, the Makin Island uses a hybrid-electric propulsion system with gas turbines for high-speed travel and electric motors for efficient low-speed operation. The new propulsion configuration has two 35,000 BHP gas turbines, two 5000 BHP AC electric motors, and six diesel generators.

GasTOPS used Model-Based Design with MATLAB® and Simulink® to model the LHD 8 propulsion plant and develop its control algorithms, simulate the electrical power generation and distribution system, and create a simulator-stimulator system for real-time hardware-in-the-loop (HIL) testing of the machinery control system. This approach enabled the team to identify potential problems before sea trials began.

“With MATLAB and Simulink, we can rectify issues early in the design phase,” says Shaun Horning, vice president of Technical & Engineering Services at GasTOPS. “Before the ship is built, we can analyze crash astern, crash ahead, and other maneuvers, and generate a set of expected results to compare with actual sea trial results.”

The machinery control system (MCS) aboard the LHD 8 controls the propulsion system, including transitions between electric motor and gas turbine drive modes, as well as more than 20 other major ship systems. Altogether, the MCS has more than 10,000 input and output signals.

To develop control algorithms for the complex, first-of-its-kind propulsion system, GasTOPS needed an accurate model of the plant. Later, GasTOPS would need to run parametric studies, model electrical power generation and distribution, generate code for HIL test setups, and create a simulation engine for an onboard training system. GasTOPS required a flexible, multidomain modeling and simulation environment that supported all these activities.

Many of these submodels came from a Simulink library of parameterized components that GasTOPS had developed for similar projects. Others were provided by OEMs as MATLAB or Fortran code, and integrated into the Simulink propulsion model.

The engineers conducted an extensive test program in which MATLAB scripts were used to launch Simulink and collect the results of simulated ship maneuvers under various environmental conditions. In parametric studies, sweeps of propeller efficiency, hull resistance, and other key values were conducted to assess MCS performance and robustness.

For the electrical plant, the team used Simulink and Simscape Electrical™ to model six diesel generators, eight transformers, numerous smart breakers, and the distribution system, as well as electric motors and other loads. They performed simulations to evaluate the system response to short circuits, generator failures, and various fault conditions.

GasTOPS combined elements of the propulsion and electric plant models with models of other machinery systems in Simulink, and used Simulink Coder™ to generate code for a real-time HIL testing setup. They streamlined this process by creating MATLAB functions that generate Simulink models based on predefined operating parameters for pumps, valves, fans, and other components.

Later, the team extended the MCS test model to support simulation of about 100 different system and component faults, and used Simulink Coder to generate C code for an onboard training system.

The MCS is now in service aboard the USS Makin Island.